Paul Bocuse is considered one of the finest cooks of the 20th century. He created the first worldwide competition of cuisine, “Bocuse d’Or” in 1987. The Bocuse d’Or has been regarded as the most prestigious award for chefs in the world. Ever since, the best cooks from all over the world has been competing to win this price. I visited one of his brasseries in Lyon, and talked to one of his cooks.

I got to visit the Bocuse brasserie “L´EST” in Lyon in February 2012, thanks to my company, who had organized an evening at the spot. It was 10pm, and the room was almost fully booked. We were waited to get a table, so I tasted the royal kirr, and admired the open kitchen. There they were; the well-trained chefs in tall toques, preparing the delicious plates for the guest. I saw main course after main course being picked up by the waiters! Would I ever be able to decide? It all looked amazing. I realized then…that I had gone to food-heaven! 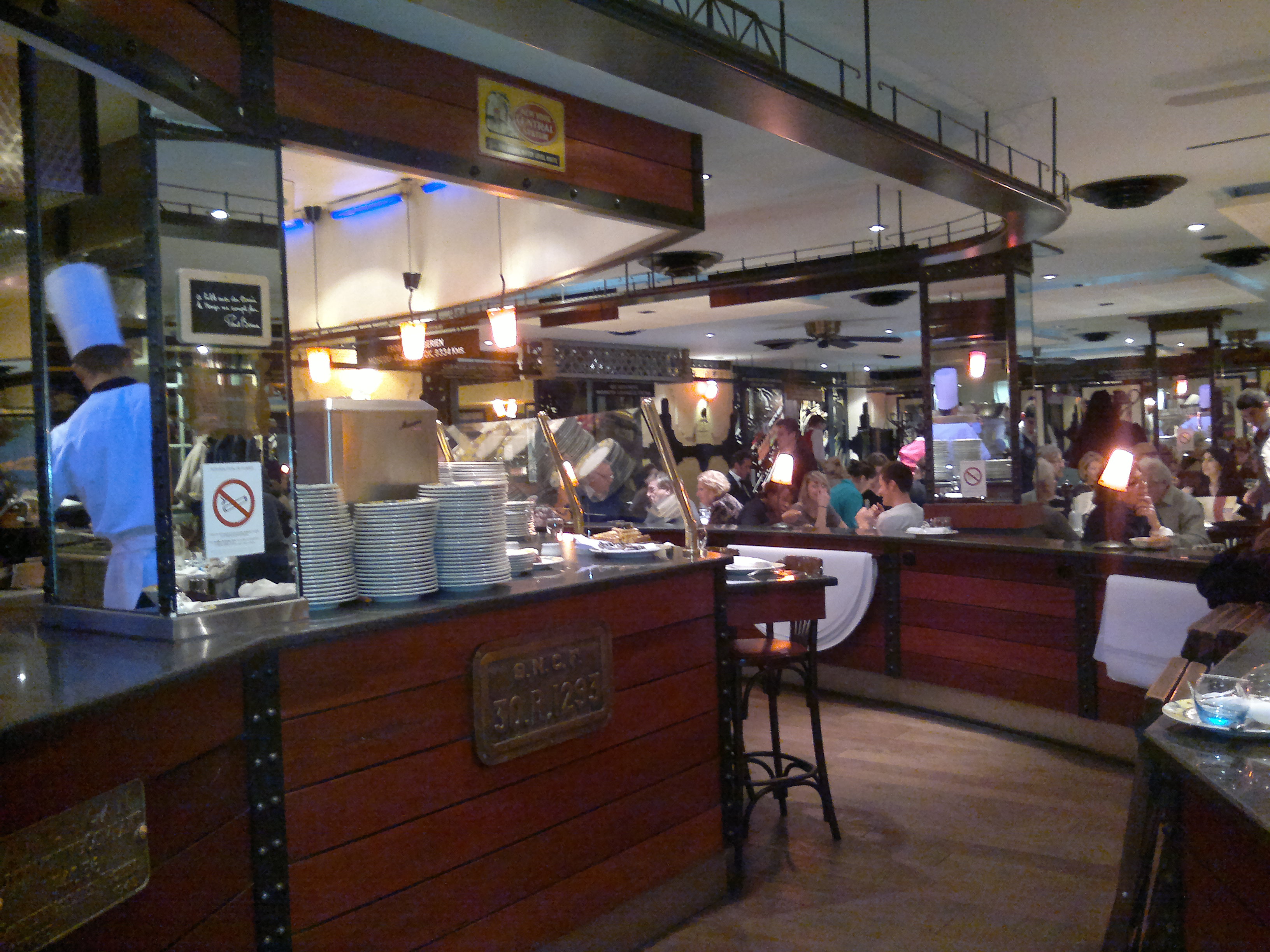 The waiters were polite, fast and with a great humor, which also add something to the experience. 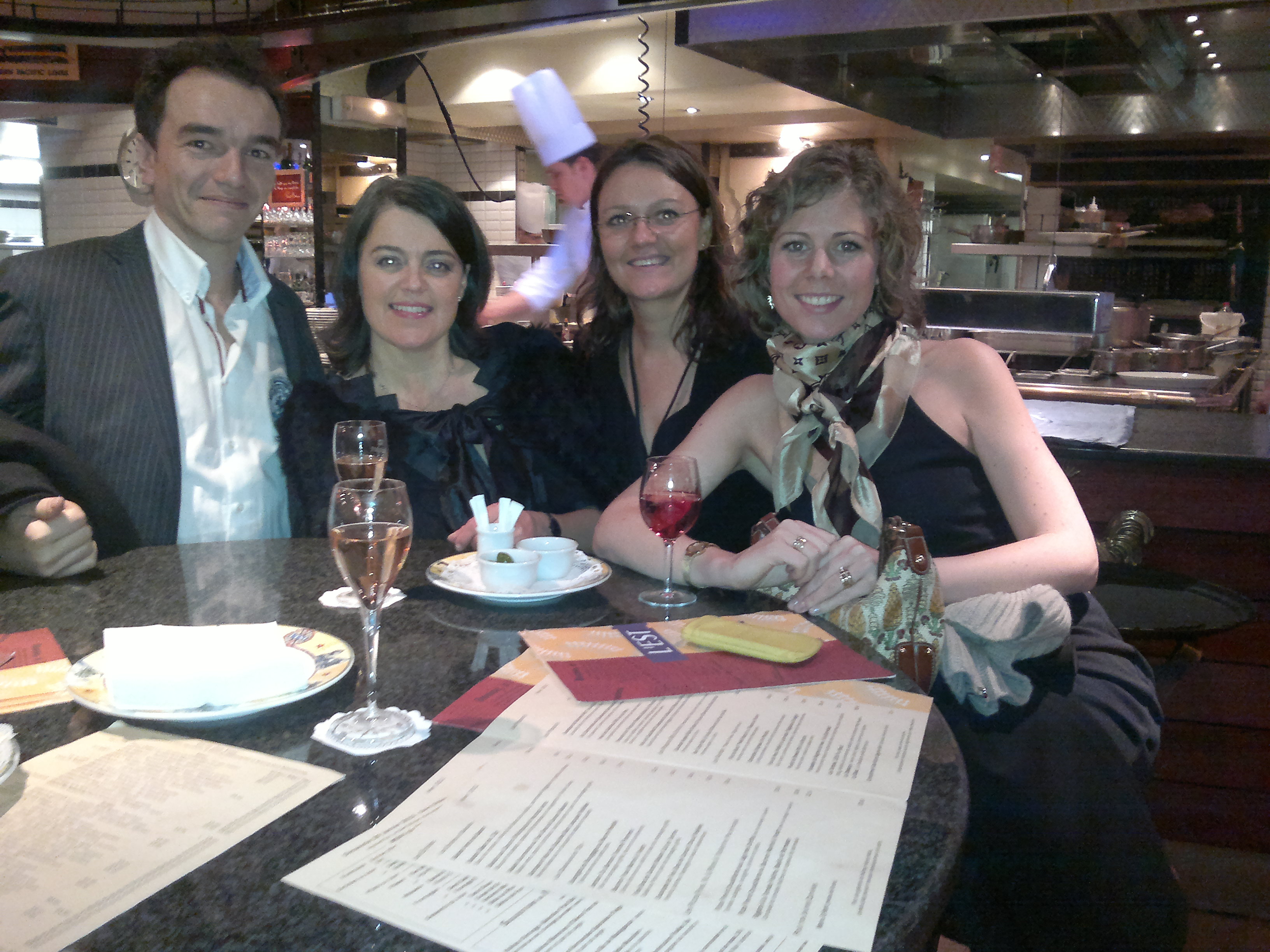 Looking up, I saw an old train, just under the ceiling, on a trail that went all around the room. I wondered if it worked! Politely I asked the waiter why the train wasn´t running? He answered that unfortunately it had been broken. He continued out in the kitchen, and just 3 minutes later, I heard the little sound of a train getting started! Amazing, off cause just a detail compared to the food-experience, but none the less, an important detail to the total experience. 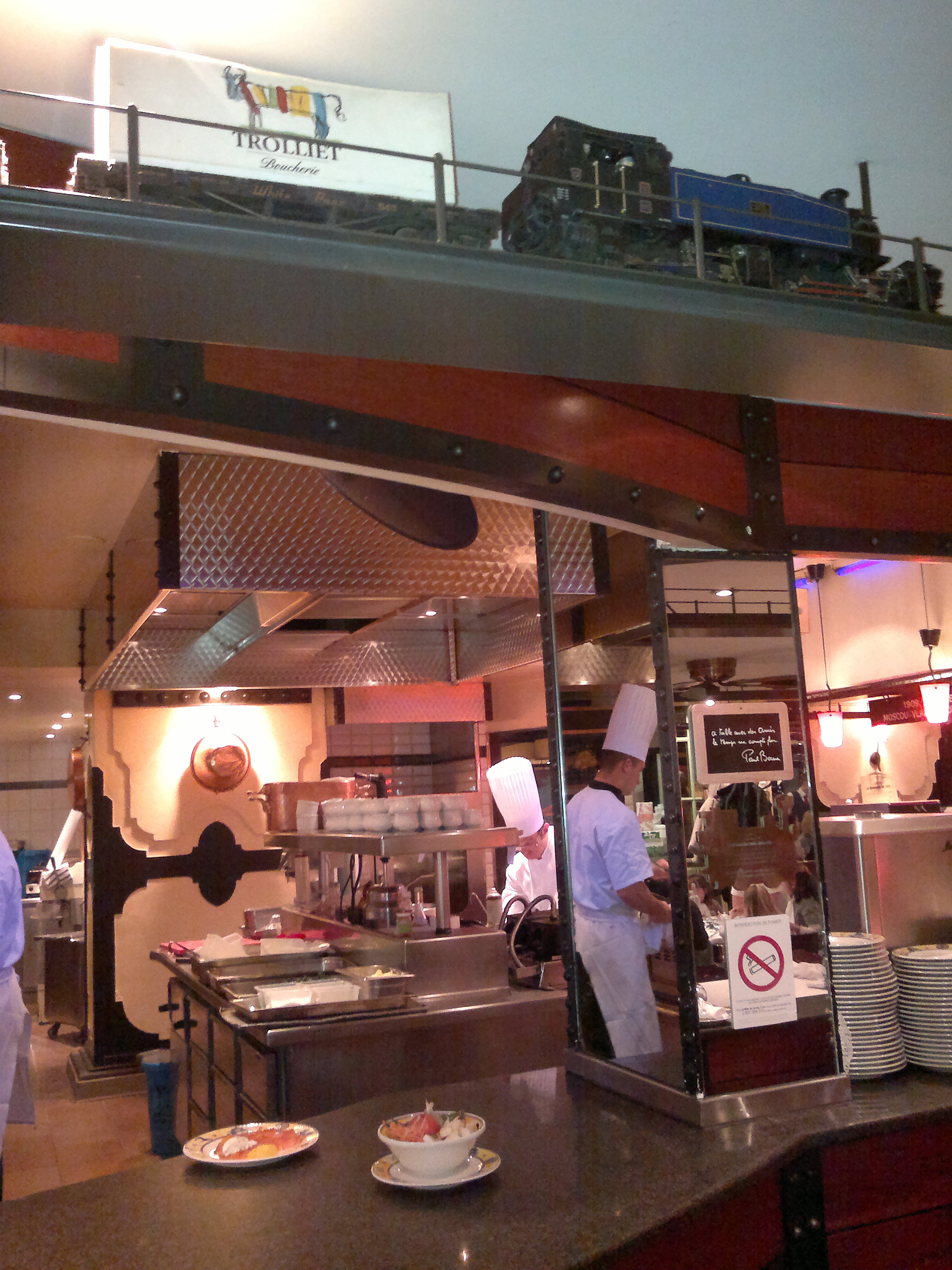 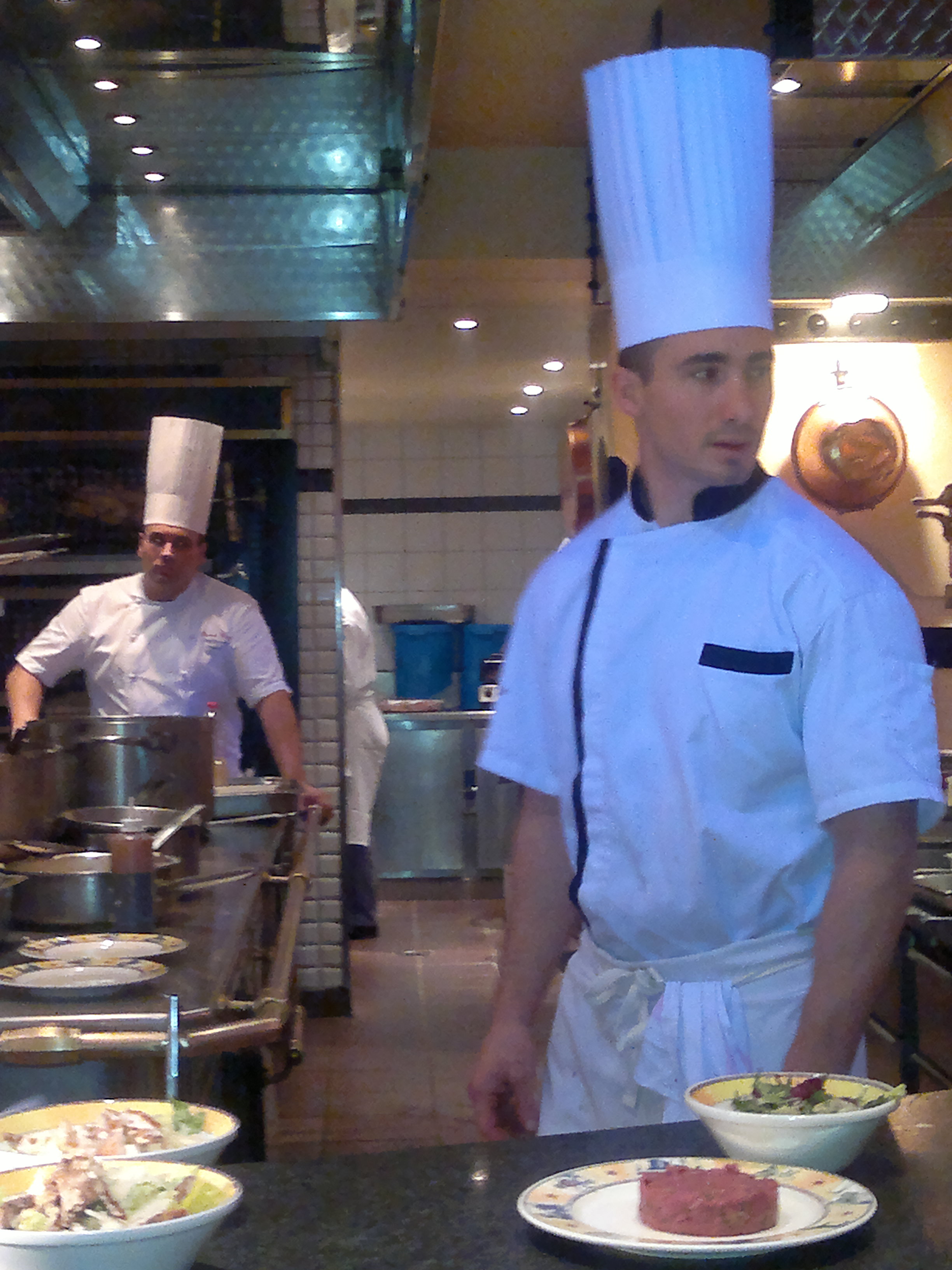 We finely had our table and got ready to order. 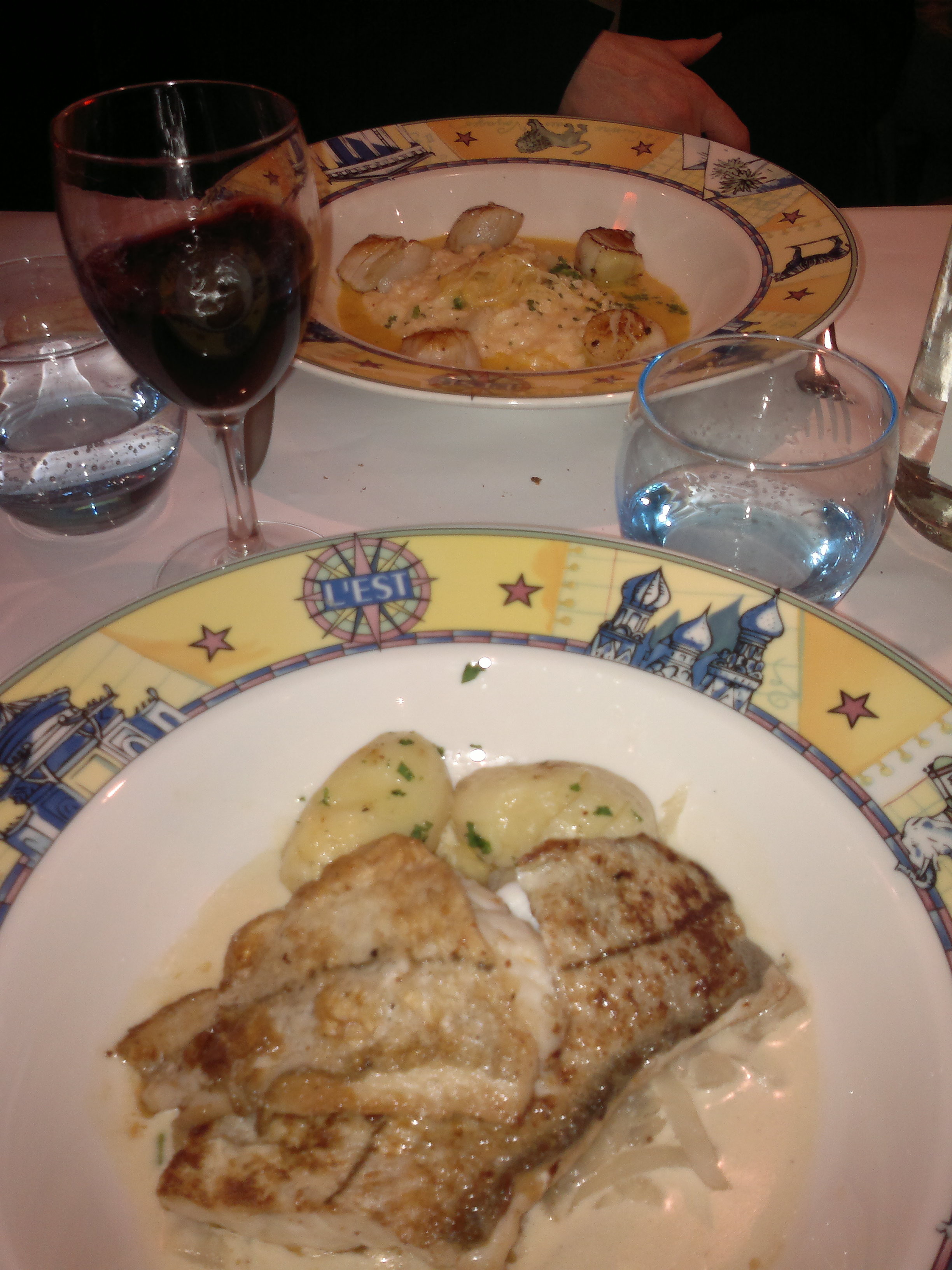 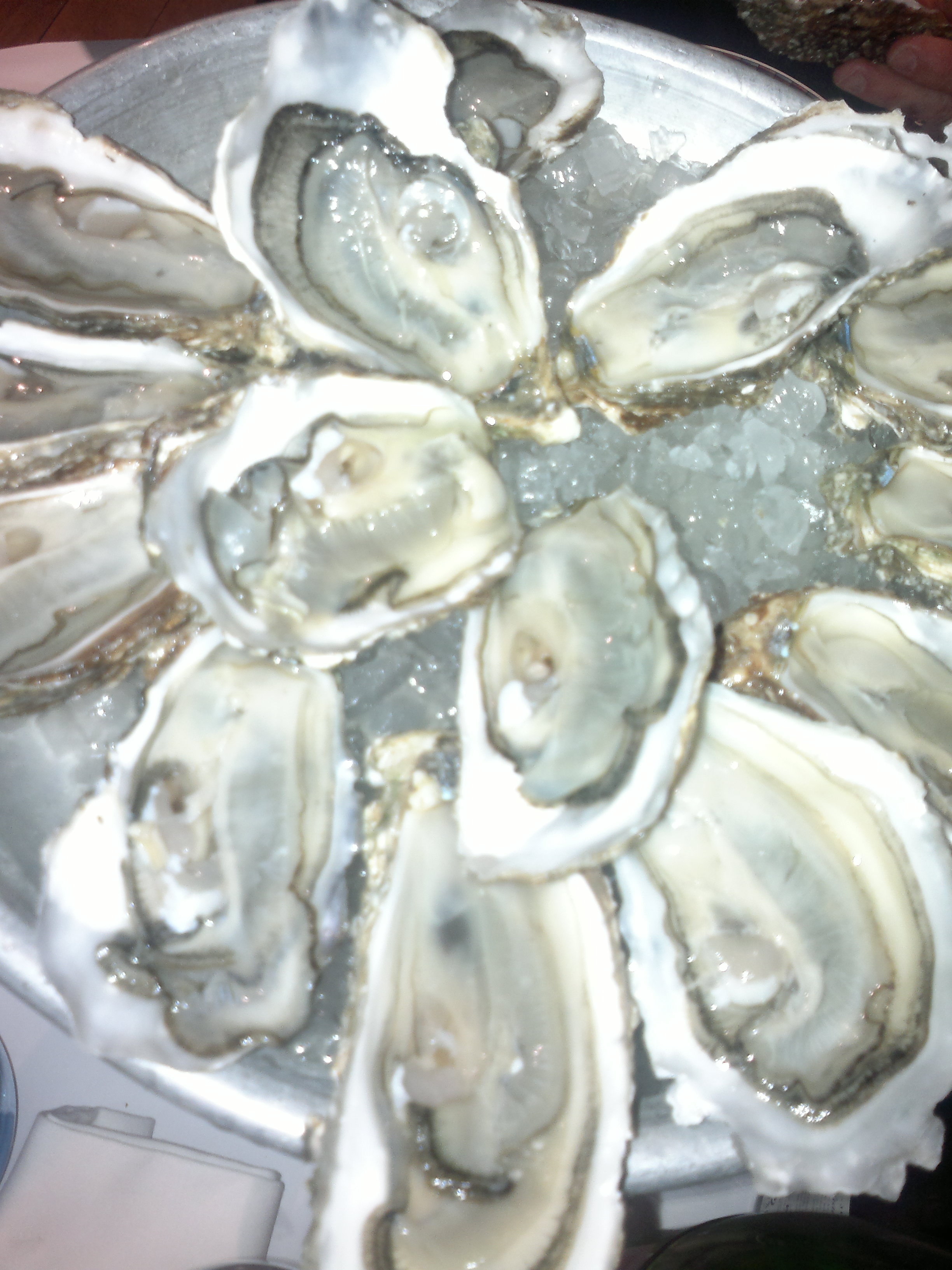 We talked to one of the waiters about how it was to work there. He said that off cause it was always a big honor to work for the most prestigious chef in the world. He added that, even if Bocuse was always polite when he came by to check up on things, as waiter he would still feel a bit of insecurity, arising from the deep respect he felt for that man!

If you haven´t yet had the change to go to a Bocuse brasserie, you should try it. It is an experience.

“In 1945 he did an apprenticeship at “La Mère Brassier” situated at the “col of La Luère”, where he looked after the garden, milked the cows, did the washing, the ironing and of course the cooking.

In 1950 he completed his apprenticeship, having learnt the refinements dear to his master, and inheriting among others, the enormous generosity of the latter, which, in his time was an exceptional character.

In 1961 he gained his first star in the Michelin: he transformed his father’s suburban cafe and gained a two star rating one year later.

In 1972 he became one of the most prominent chefs associated with the nouvelle cuisine (the term was first used in a newspaper article), which is less opulent and high-calorie than the traditional haute cuisine, and stresses the importance of fresh ingredients of the highest quality.

In 1975 Bocuse created the world famous soupe aux truffes (truffle soup) for a presidential dinner at the Elysée Palace.

In 1987 he created the first worldwide competition of cuisine, “Bocuse d’Or”.

Since, the Bocuse d’Or has been regarded as the most prestigious award for chefs in the world, and is sometimes seen as the unofficial world championship for chefs.

In 1989 he was elected as the “Chef of the Century” by Gault and Millau.

In 1997 he presented his best wishes on CD-ROM.

In 1999 he started sending out his greetings throughout the world thanks to the Web.

Today he promotes the nouvelle cuisine.”

Who has won the Bocuse Award?

France, the invariable home team, has won gold on six occasions, while Belgium, Norway and Sweden have consistently finished in one of the top three placements. Lea Linster of Luxembourg became the first woman to win in 1989, and Rasmus Kofoed of Denmark became the first multiple medalist with bronze and silver in 2005 and 2007, and the eventual gold medal in 2011.The U.S. team has to date never placed higher than sixth as in 2003 and 2009,while the highest ranking of a North American chef yet is the fourth place result of Canadian Robert Sulatycky in 1999.