A very good friend of mine made me discover the most famous Brasserie in Paris. A historical place: La Coupole 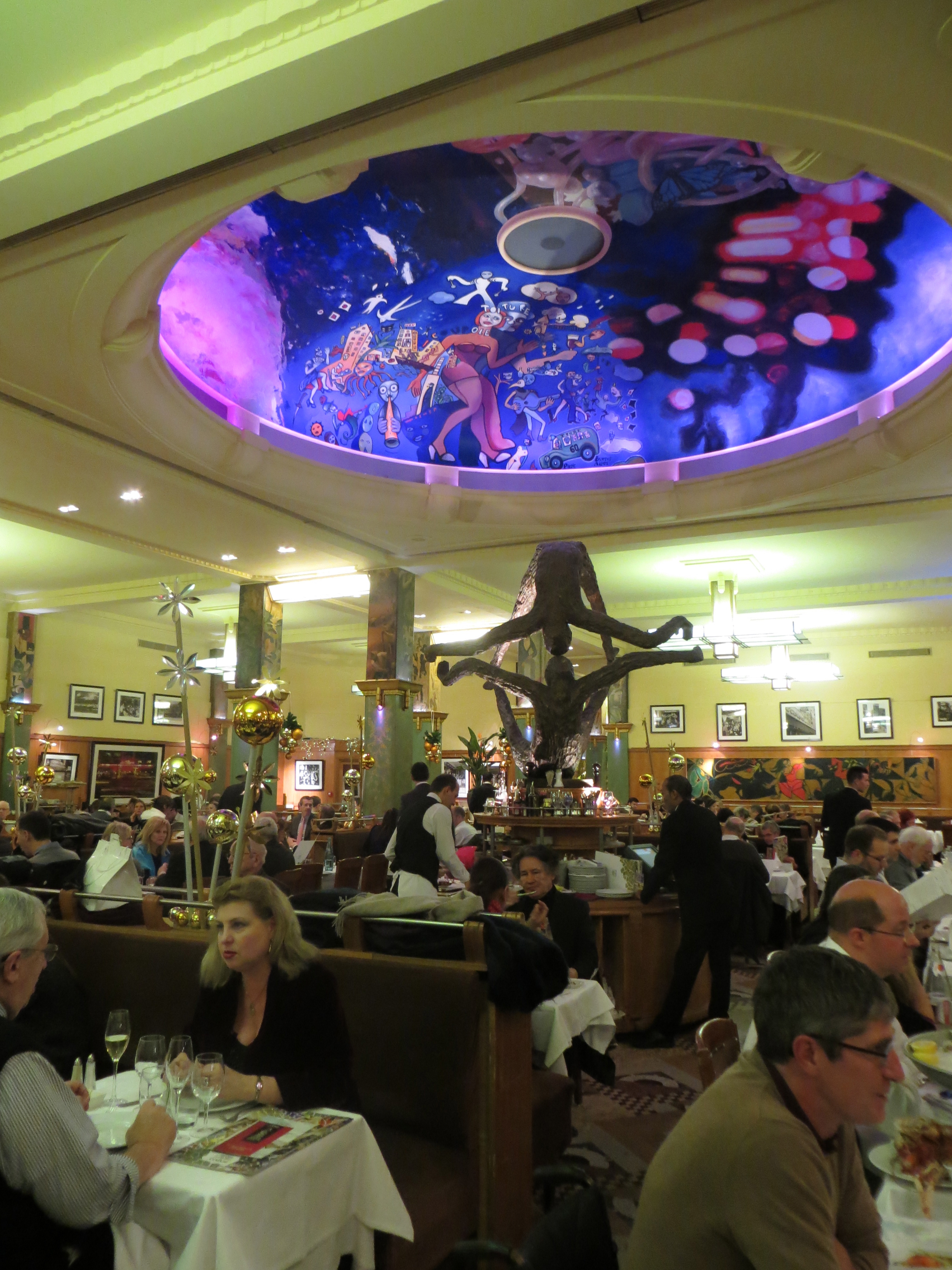 THE LEGEND OF LA COUPOLE

The moment you walk in the door you enter the legendary history of La coupole.

You see pillars treated in imitation marble and Cubist-inspired mosaics that are listed on the Registry of Historic Monuments. La Coupole is the temple of Art Deco.

“It was brought to life in 1927. Its grand opening was attended by the brightest stars of art, literature and nightlife: artists and their models, socialites and big spenders, easy women and impossible women.” It says in the menu card. 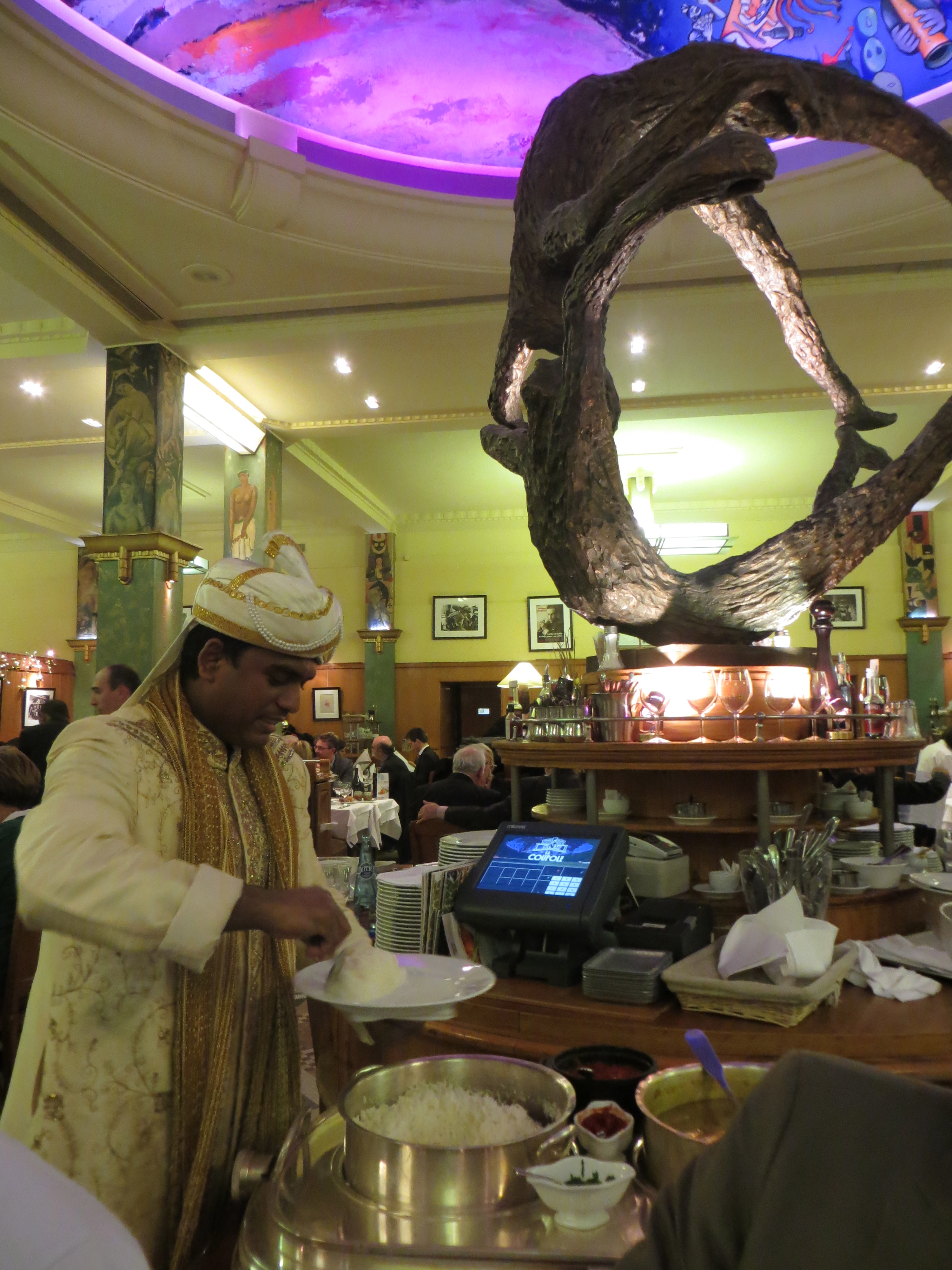 The atmosphere is very parisian though people from all over the world come to this place to experience it as well.

I tried the famous Lamb / curry dish! Amazing. Especially the serving: An Indian man enters the room with a table for preparations and serves your meal. 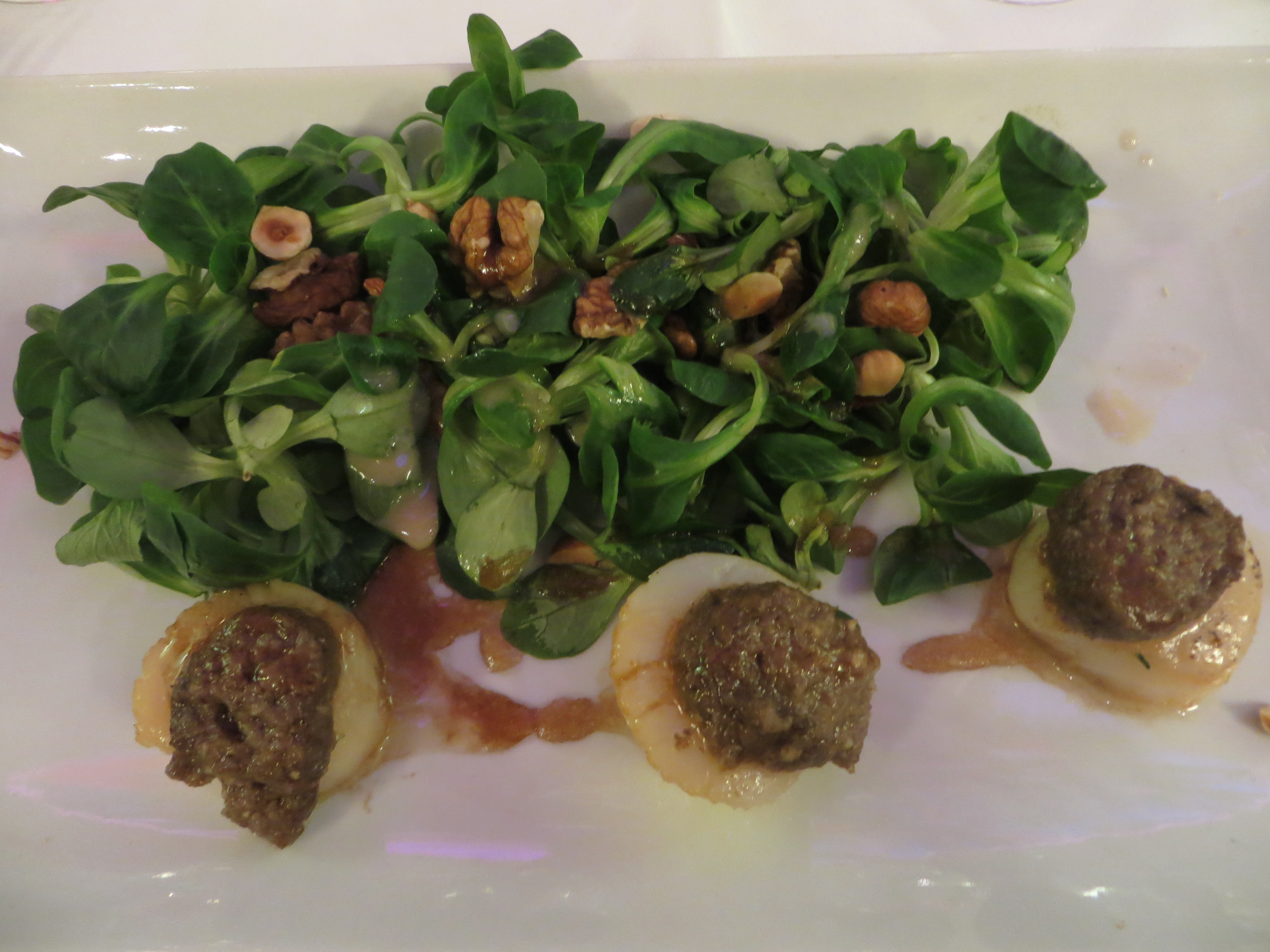 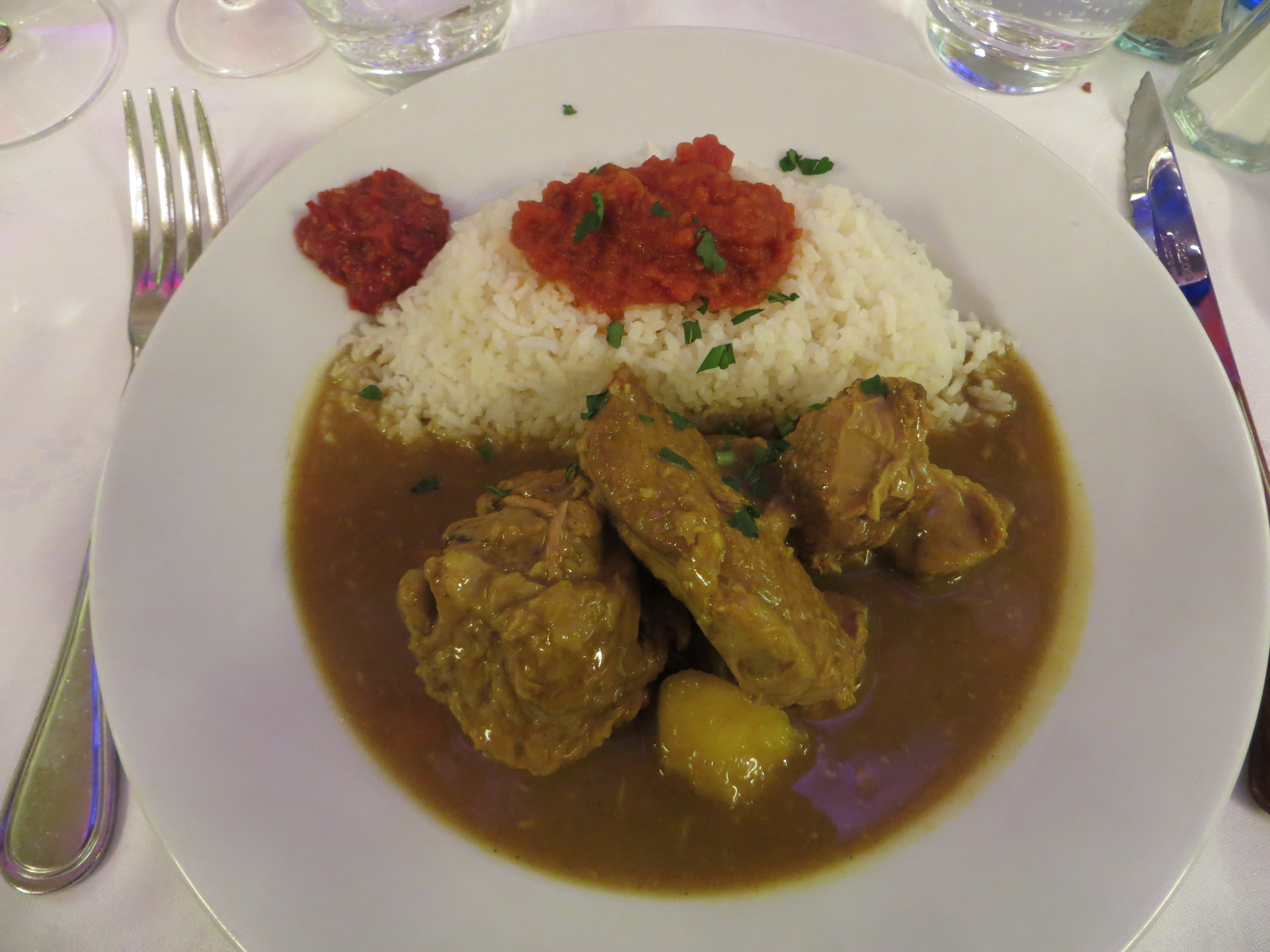 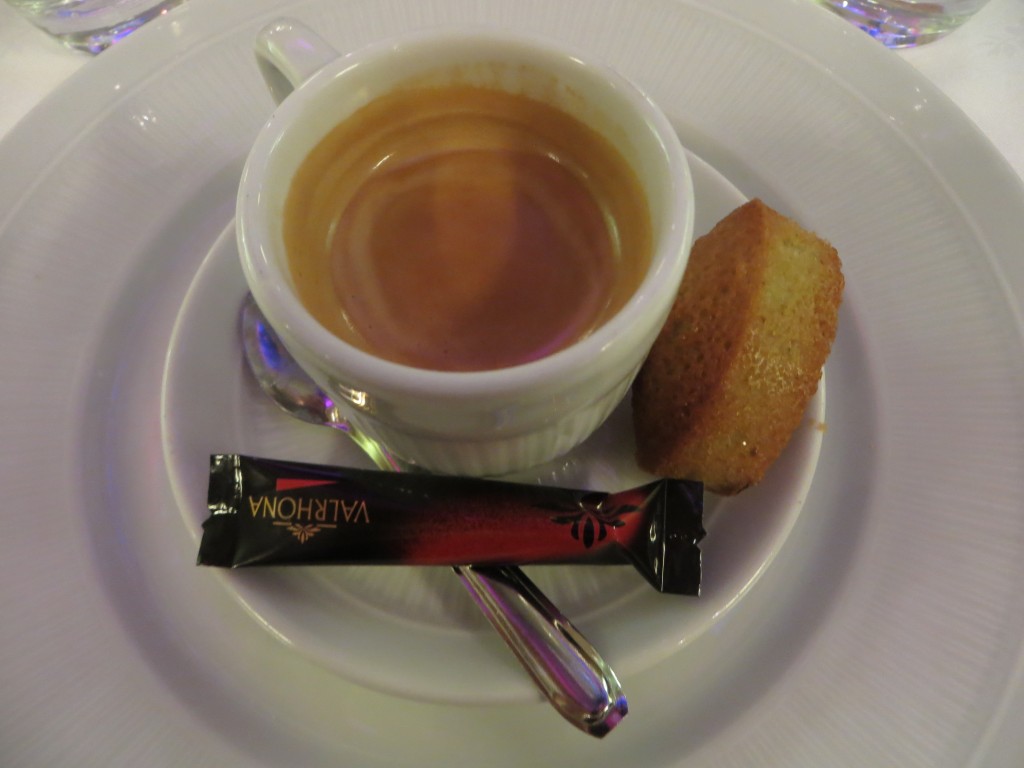 HISTORY OF THE FAMOUS PEOPLE WHO HAS DINNED AT LA COUPOLE:  (Found on the website of La Coupole… quite interesting to scroll down and read before you go there… it will take you on a historical journey…and Im sure it will make you experience the atmosphere at La Coupole differently when visiting… it started back in 1927…)

Aragon Louis (1897-1982)Letters
At the grand opening on 20 December 1927, the writer left the establishment in the week hours in a police van. Nearly a year later, on 6 November 1928, it was at the bar that he met the woman who would become his constant companion, Elsa Triolet.

Ardisson Thierry (1949)Gotha & People
In 1986, on his first date at the bar with the woman who would become his wife, Béatrice, the television host gave her a copy of his latest work, « Louis XX », which she forgot to take with her.

Arron Christine (1973)Sports
“May this good meal make me run even faster.” A few days after writing that sentence in the Guest Book, the European champion in the 100-metre dash won a silver medal in the 4 x 100 relay at the European Championships (1998)..

Baker Joséphine (1906-1975)Entertainment
Immortalised by Victor Robiquet on the pilaster at the back of the dining room on the right, the « banana dancer» caused a stir when she settled in with Chiquita, a female cheetah, or a lion cub.

Beauvoir (de) Simone (1908-1986)Letters
When she was young, the author of « The Second Sex » ordered hot chocolate on the terrace. Later on, she preferred the paper tablecloths of the brasserie to the linen ones in the restaurant admired by Jean-Paul Sartre. La Coupole was the backdrop for one of her novels, « The Guest».Table n°149

Birkin Jane (1946)Entertainment
On Sundays she took lunch in the brasserie with Serge Gainsbourg. Sometimes in the afternoon she would head to the dance hall. Their daughter, Charlotte, has remained loyal to the establishment.Table n°24

Blum Léon (1872-1950)Politics/span>
In September 1936, the chairman of the Front Populaire put the finishing touches to his Luna Park speech in which he justified the non-intervention of his government on behalf of the Spanish Republicans.

Bowles Paul (1910-1999)Letters
In “Memoirs of a Nomad”, the American writer describes his journey in the early 1930s: “The first morning in Paris, we took our breakfast on the terrace at La Coupole.” 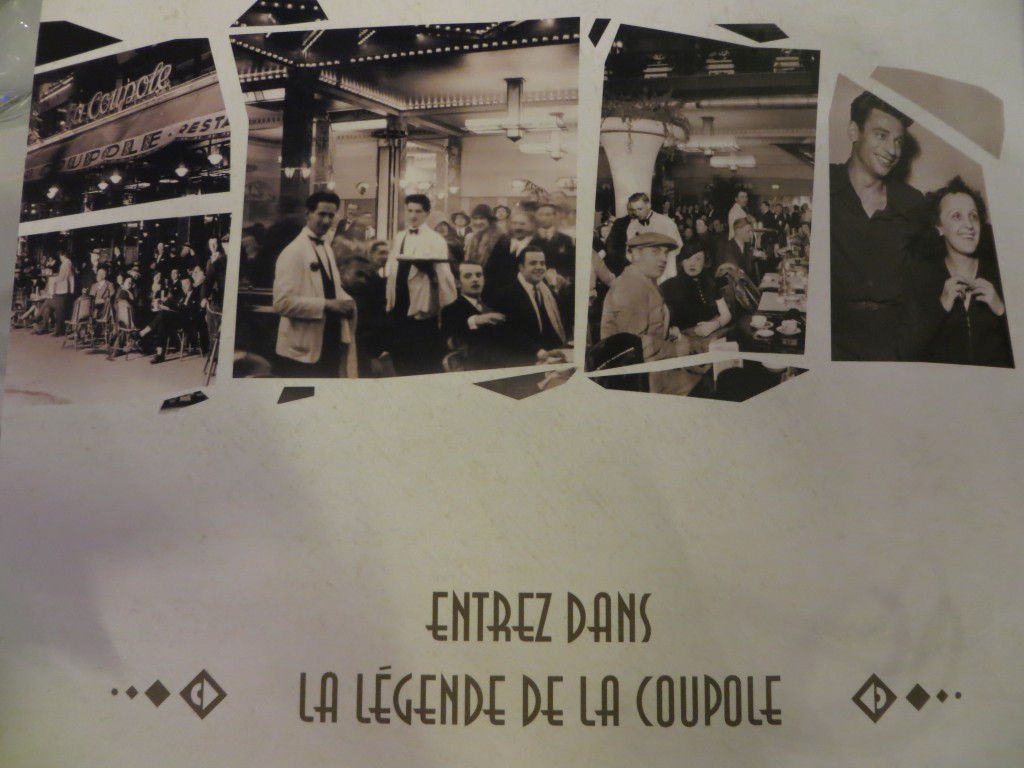 Brando Marlon (1924-2004)Entertainment
According to his biographer, Darwin Porter, in 1949 the star caught the eye of Vadim and Christian Marquand: “At La Coupole they noticed an Adonis massaging his bare foot on the table. Moaning in ectasy, like a woman about to orgasm, he kept repeating: ‘Damn that’s good…'”

Breton André (1896-1966)Letters
The patriarch of surrealism slapped the painter De Chirico because he disapproved of the new realist movement.

Camus Albert (1913-1960)Letters
In October 1957, the author of «The Stranger» celebrated his Nobel Prize for Literature.

Cohn-Bendit Daniel (1945)Politics
In May 1968, Dany the Red ordered a lobster. When the waiter took too long, he climbed atop the table and shouted to the crowd.

Dali Salvador (1904-1989)Arts
” The only difference between me and a fool is that I am not a fool.” At the table of the Spanish surrealist painter, one could spy Amanda Lear, two ocelots and a young panther. One day he threw himself at Brassai to bite his nose. “It was a natural reflex, not a mean gesture.”

Doisneau Robert (1912-1994)Arts
The photographer of Paris haunted its cafés. At La Coupole, from Foujita to Cendrars and Giacometti, he gathered with his many friends.Table n°87

Farmer Mylène (1961)Entertainment
In the 1980s, the singer of”Libertine“ lunched here many times with TV host Jackie to prepare for her appearances on “Platine 45“ and “Jackie Show”.

Fitzgerald Scott (1961)Letters
In the Roaring Twenties, the author of “The Great Gatsby “ took breakfast with his wife Zelda. And with champagne.

Giacometti Albert (1901-1966)Arts
The sculptor arrived around midnight, straight from his neighbouring studio and covered in plaster. He would head home in the week hours with a tablecloth full of his drawings.Tables n°95-96

Girardot Annie(1931-2011)Entertainment
“To La Coupole, the most beautiful and illustrious witness to my youth. All my affection forever.” The following year, the actress – abandoned by the cinema – received the César for best actress for a supporting role in “Les Miserables“ by Claude Lelouch.

Hayworth Rita(1918-1987)Gotha & People
The star dined with her third husband, Prince Aly Khan, whom she wed on 27 May 1949, in Hollywood pomp and splendour in Vallauris.

Hemingway Ernest(1899-1961)Letters
Legend has it that the future author of “Moveable Feast“ liberated La Coupole alongside the Second Armoured Division in 1944.

Higelin Jacques (1940)Entertainment
With actors Pierre Clementi, Jean-Pierre Kalfon, Bulle Ogier and Maria Schneider and singers Sapho and Nico, the singer was one of the pioneers of the underground with the “La Coupole gang” in the 1960s.Table n°70

Jagger Mick (1943)Entertainment
The lead singer of the Rolling Stones was filmed by Japanese television before a platter of oysters.

Kennedy Jackie (1929-1994)Gotha & People
The former First Lady of the United States had lunch with a friend after the assassination of her husband, John F Kennedy; she had not yet married Aristotle Onassis.

Kessel Joseph (1898-1979)Letters
The author of “Belle de Jour “ lined up his glasses then caused a stir by eating them: “You’re overlooking the best part”, the painter Kisling told him, holding out the stem of his glass.

Kerry John (1943)Politics
In 2004, after his unsuccessful White House run, the Democratic candidate dined at Jean-Paul Sartre’s table with his cousin, Brice Lalonde. When he left the brasserie, the dining room gave him a standing ovation.

Kisling Moise (1891-1953)Arts
The painter was awarded the Legion of Honour by the Minister of Fine Arts at La Pergola, in 1950.

Matisse Henri (1869-1954)Arts
He came from his workshop at 132, Boulevard du Montparnasse, to spend time with his friend Derain or members of the “Ladder Group”.

Mitterand François (1916-1996)Politics
In November 1995, the former President of the Republic, who had his habits, ordered his last meal. He dined on lamb curry.Table n°82

Piaf Edith (1915-1963)Entertainment
With her coarse voice and scorching comportment, “La Môme” twirled and bewitched many of her admirers and lovers, from Yves Montand to Georges Moustaki.

Picasso Pablo (1881-1973)Arts
The painter met with his friends from the School of Paris: Derain, Léger, Poliakoff and many others. He showed his work at La Coupole on 15 June 1951.

Ray Man (1890-1976)Sports
“I photographed the way I painted,” he said, “transforming the subject as a painter would.” The American photographer-filmmaker dined with one of his favourite models, Youki.Table n°56

Renaud (1952)Entertainment
In 1973, this street urchin panhandled on the terrace, playing Aristide Bruant’s songs on the accordeon. Two years later, one of the songs on his album “Amoureux de Paname” was called “La Coupole”.Table n°102

Sartre Jean-Paul(1905-1980)Letters
The high priest of existentialism sat at a table near the cloakroom where he could observe the young girls.Table n°149

Stone Sharon (1958)Entertainment
She signed the Guest Book in 1996. Onscreen she played the mistress of a university professor in a remake of “Diaboliques”.Table n°90

Trenet Charles (1913-2001)Entertainment
La Coupole, where I spent the best moments of my young life as a student,” wrote the singer of “La Mer”..