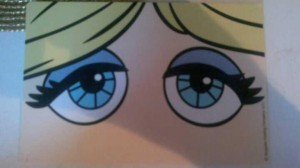 I thought that all good times with the Muppet Show was long gone, until I saw them again in march 2009, in the form of a haute couture collection theme! Apparently they had found their way back into the latest Jean Charles de Castelbajacs haut couture collection – displayed on the catwalk in Paris. You don´t want to miss it!

Wearing my long pink Hugo Boss silk dress and high heels, I was ready to occupy a seat on the third row – and I wasn´t the only one ready to do a shooting of the newest Jean-Charles de Castelbajac collection. At the end of the huge hall all the great fashion-photographers were lined up with their long lenses. 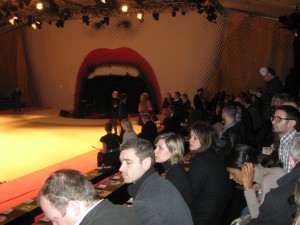 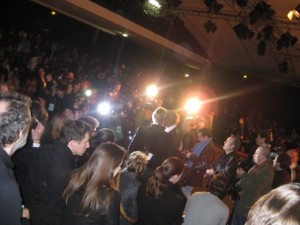 French celebrities were finding their seats, after having fought their way through the camera flashes. 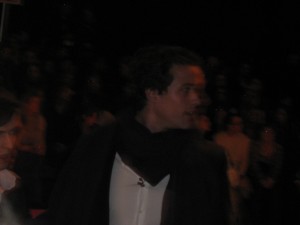 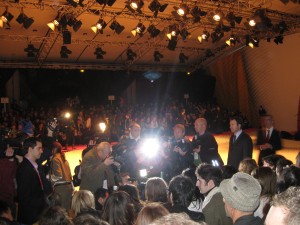 The light turned off and an electronic sound of music began. Everyone was now sitting in totally darkness. Then a second of white flash lighted up the room, followed by another, until it rhythmically, followed the beat of the music.

Bright female voices began to accompany the music, and instantly the flashes switched into a steady red light. Then the red light disappeared, and instead it was replaced by a pure white spotlight.

The first model entered the catwalk, slipping elegantly down the white carpet, wearing a suit in leopard-pattern. 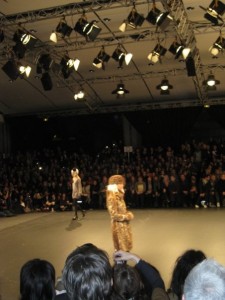 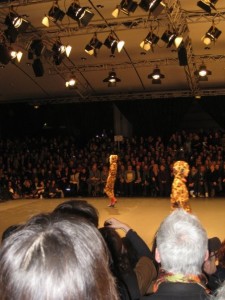 Next model was wearing a raincoat in leopard-print. There could be no doubt that the leopard theme was going to be amongst the upcomming fashion-trend. 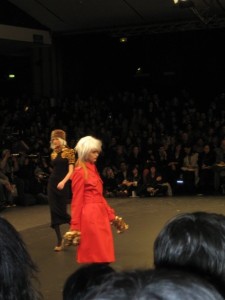 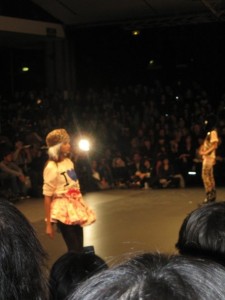 Besides that, there were lots of prints – dresses made in a plastic fabric, showing a motif of a large dollar bill, or a mouth. Take a pair of black tights underneath, and some high plateau shoes, and you are on the beat.

Repetition is apparently good. So even though we have seen leather-clothes many times before, it doesn´t mean we can´t wear it again. Jean Charles de Castelbajac showcased  leather dresses several times in this catwalk…which means that leather is back.

Finally the long awaited muppetshow-theme. I simply just loved it. Take a look at the show below.

To me that´s also what creativity is about – taking a wellknown theme such as the muppetshow, and turning it into something new and fashionable, in a way no one else before you had thought about. Not only does it give us a different look for the spring, it also makes us recall the good moments with muppetshow. I loved it!