Have you ever considered what it is like to be working within the world of luxury? To be the creator of some of the world´s finest jewelries like Dior, Van Cleef, Cartier jewelries etc.? I talked to Christophe Lemaitre, Fine Jewelry designer: Who has worked at some of the best Parisian Ateliers: fabricated jewelries for some of the fine stores at Place Vendome and after many years of experience became jewelry designer for Dior. Today he has his own company and is amongst the best jewelry fabricators and designers.

Read his story here and get an insight in the world of luxury and fine jewelries.

THE WORLD OF FINE JEWELRIES: WITH CHRISTOPHE LEMAITRE!!!  –  PART ONE

While the Parisian citizens were rushing by outside the restaurant in the narrow streets of the 2nd district, Tuesday 08.01.2013, I sat inside the restaurant with Christophe Lemaitre enjoying a great dinner, while he told me his story about the world of luxury and fine jewelry. 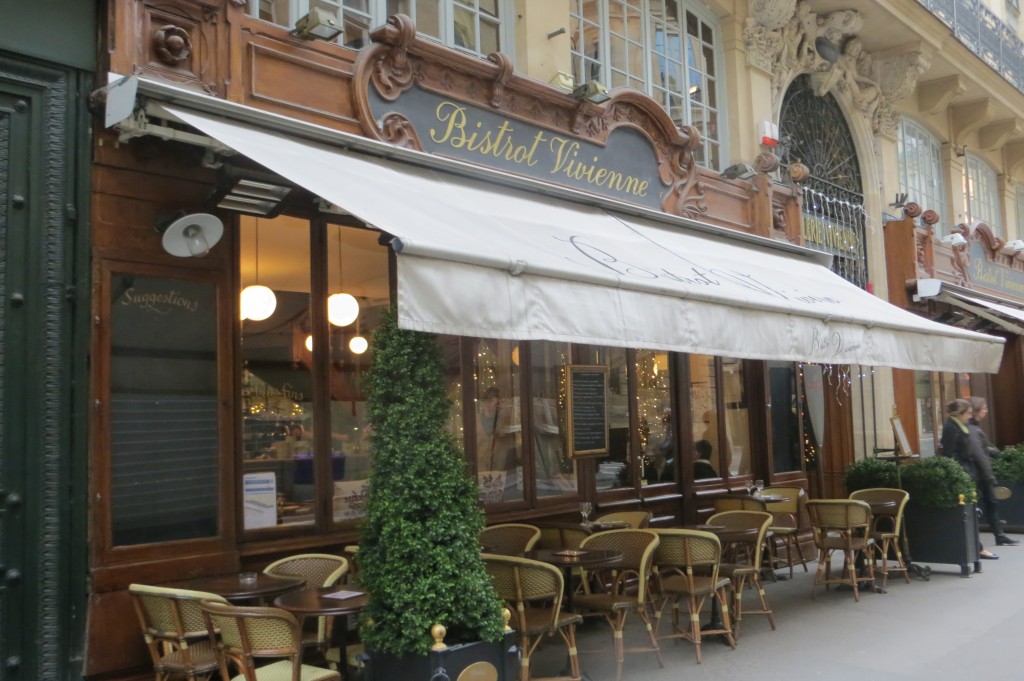 As most people know “All the stores at Place Vendome are the references in the world of jewelries.”

It attracts people from all over the world who order and buy their fine jewelries there.

But do you ever consider how they are made? The process preceding the sale in the store? The great craftsmanship, the know-how and the perfectionism it takes to fabricate a fine piece of jewelry?

“At place Vendome you´ll only find the stores and in some cases the brands´ study-office, but the Ateliers where the pieces are made are placed elsewhere.”

“In general it is rare that the brands have their own atelier. Instead they work with specialized Parisian Ateliers to fabricate their designs.” tells Christophe.

“The Ateliers are specialized within different jewelries and disciplines such as: rings, bracelets or necklaces: polishing, knowledge of the stones etc. The brands work with them simply because they are the best in the world within their field.” Christophe explains.

“It is a way of assuring the top quality to the clients… because it requires a special expertise to produce the best of the best. Very often the fine jewelry houses at Place Vendome use the same people/ateliers because these are the best.” 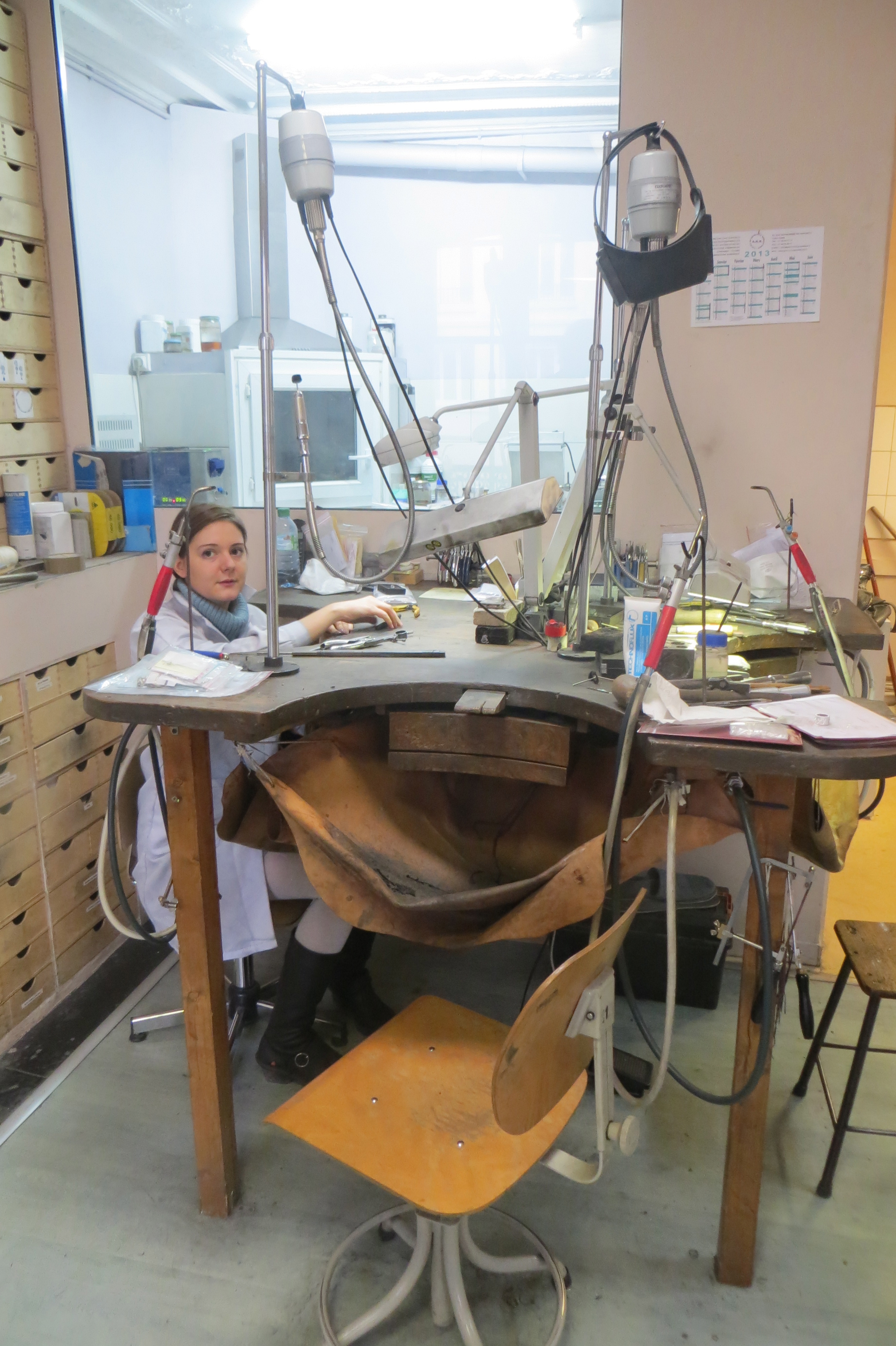 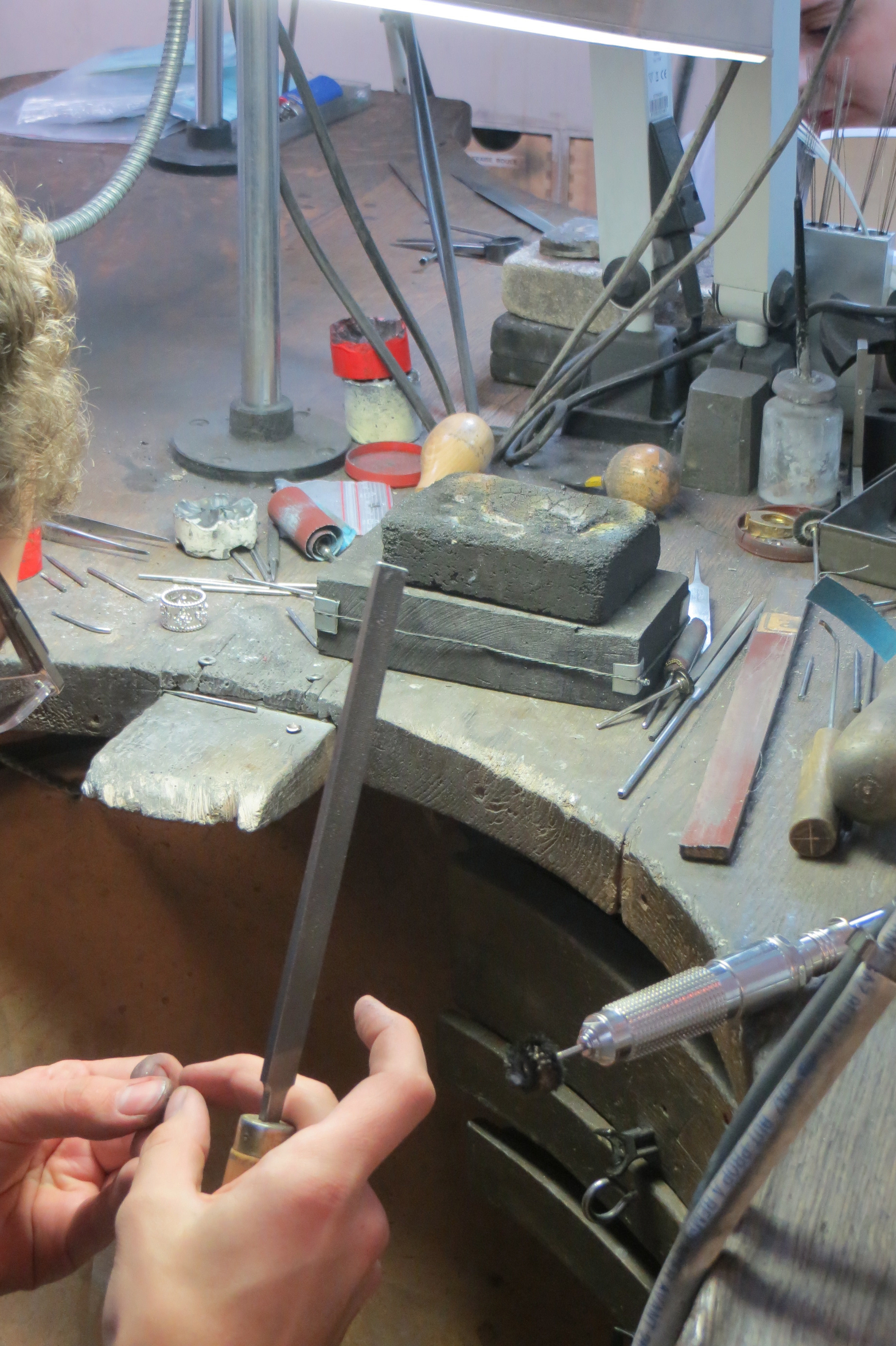 “Another reason why the brands don´t have their own atelier is because it´s very expensive and complicated to install. They´ll need laser-machines and special equipment, which is expensive. They´ll have to respect the ecological laws of how to get rid of gasses etc. So when you take all of it into consideration it is often easier to work with specialized ateliers rather than getting your own.”

“Off cause all creation happens within the company. Each of them has their own designer-office. But when the pieces are going to be fabricated it´s the

Parisian ateliers that do that.” Christophe explains.

Working at the Parisian Ateliers 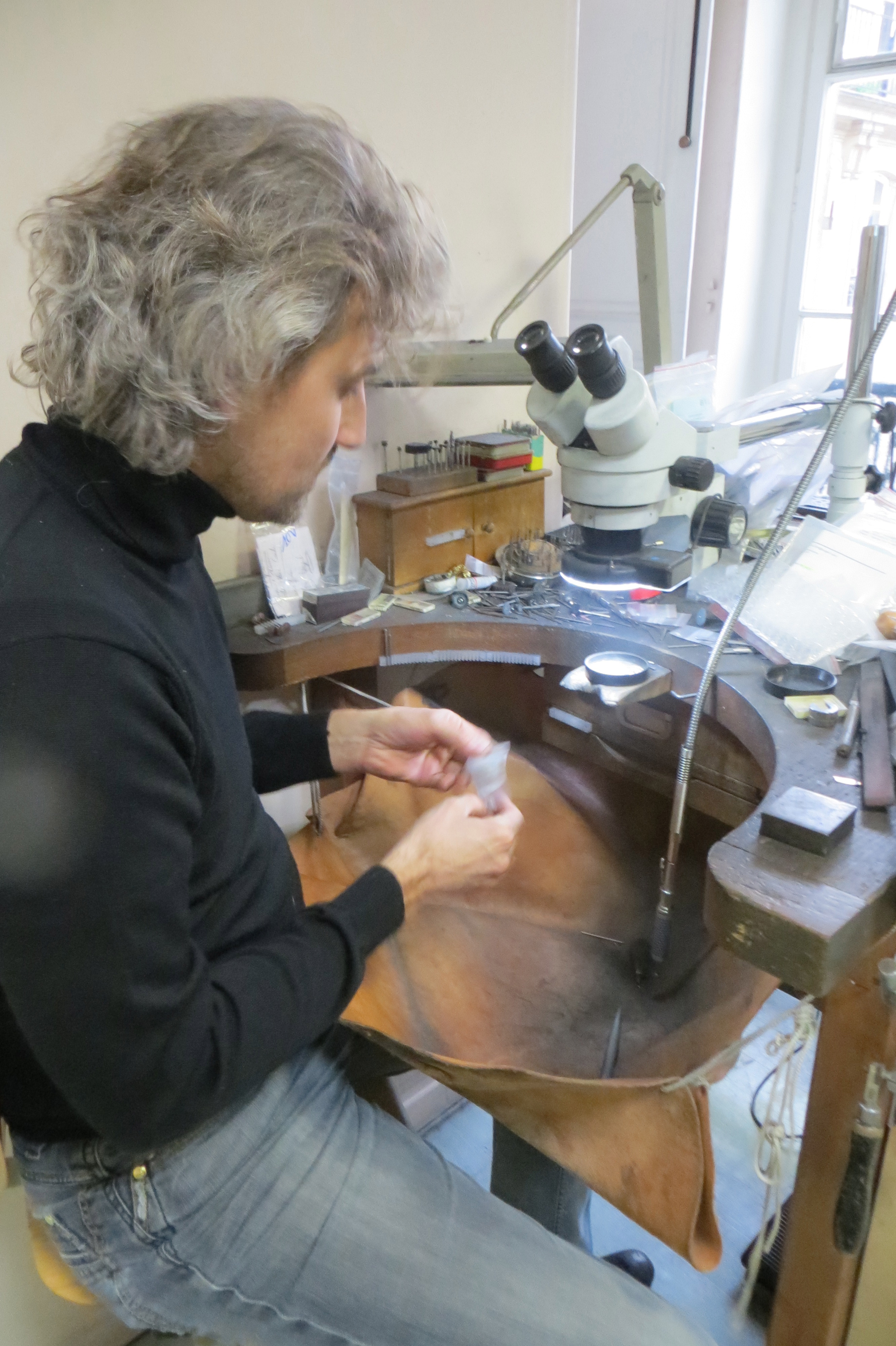 Christophe Lemaitre worked at some of these ateliers for about 25 years – fabricating fine jewelries for the big brands.”

“We fabricated fine jewelries for some of the finest stores at Place Vendome such as Van Cleef, Fred, Cartier, Boucheron etc. I worked on the crown for Rania the queen of Jordan under Fred Company and helped in the work of a belt created to the king of Morocco by Boucheron.” Christophe says.

While a “Chateldon” sparkling water was poured into our glasses, Christophe told me how he became a fine jeweler. A warm smile reflected his passion for fine jewelries as he continued telling.

HOW TO BECOME A FINE JEWELER?

“I grew up in France – in the Normandy – but moved to Paris to study. I started studying in the school that forms fine jewelers in Paris: “Ecole de Joaillerie de Paris”. Followed by two years at the International Design Academy. Then four years at “National Institute of Gemology” to accomplish a know-how about the different precious stones in the world.”

“Afterwards I started working in a jewelry store for five years. I gained experience and became an assistant of the recognized jewelry designer: Pascal Morabito” Christophe says.

That’s where it all started.

After that Christophe entered the Parisian Ateliers which became his step-stone into the world of luxury. He started working and gained an incomparable experience in fabricating fine luxury jewelries.

So when Bernard Arnaud (owner of the Dior- and LVMH group) in 1998 decided to open up a Jewelry department for Dior, he chose Christophe to become the first jewelry designer for Dior Jewelries.

WHAT IS IT LIKE TO WORK WITH DIOR JEWELRIES? 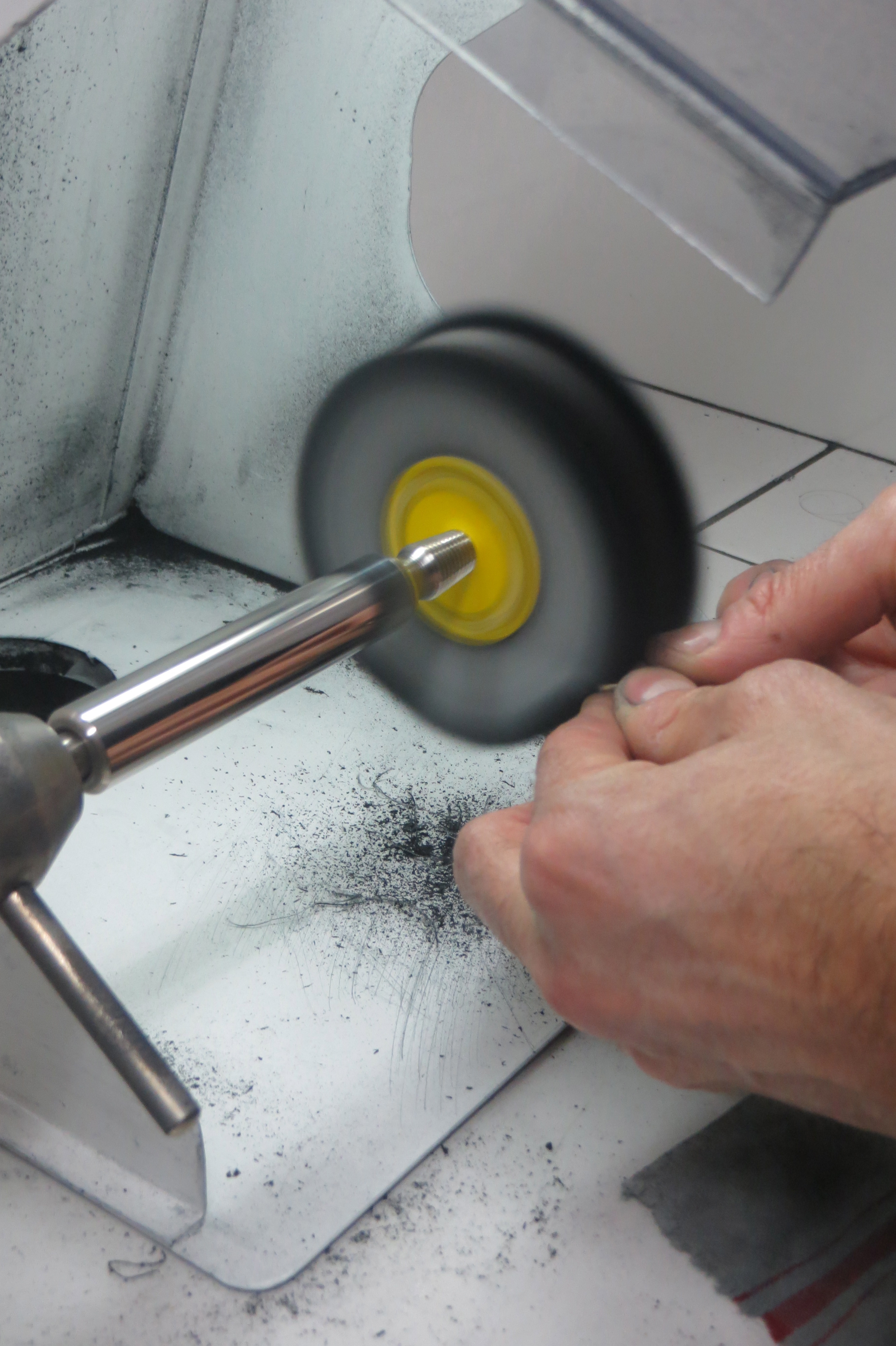 Designer of Dior Jewelries in 1998

Christophe smiled as he told me what it was like to be working as designer of Dior Jewelries.

“I drew the jewelries together with two other persons: A responsible for the style and another designer/drawer like I. We felt like living in the spine of Dior. We worked with John Galliano as Creative Director of Dior.”

“We always tried to design the jewelries in the spirit of Dior and think of the way Christian Dior would have designed them.”

“We were lucky that Mr Arnaud would open up the Dior archives to us, so we could see the books of Christian Dior. He had attached the tissue and his research to these books. I had them in my hands and tried to understand the spirit of Dior. It was really interesting and enriching to our work,” Christophe says. 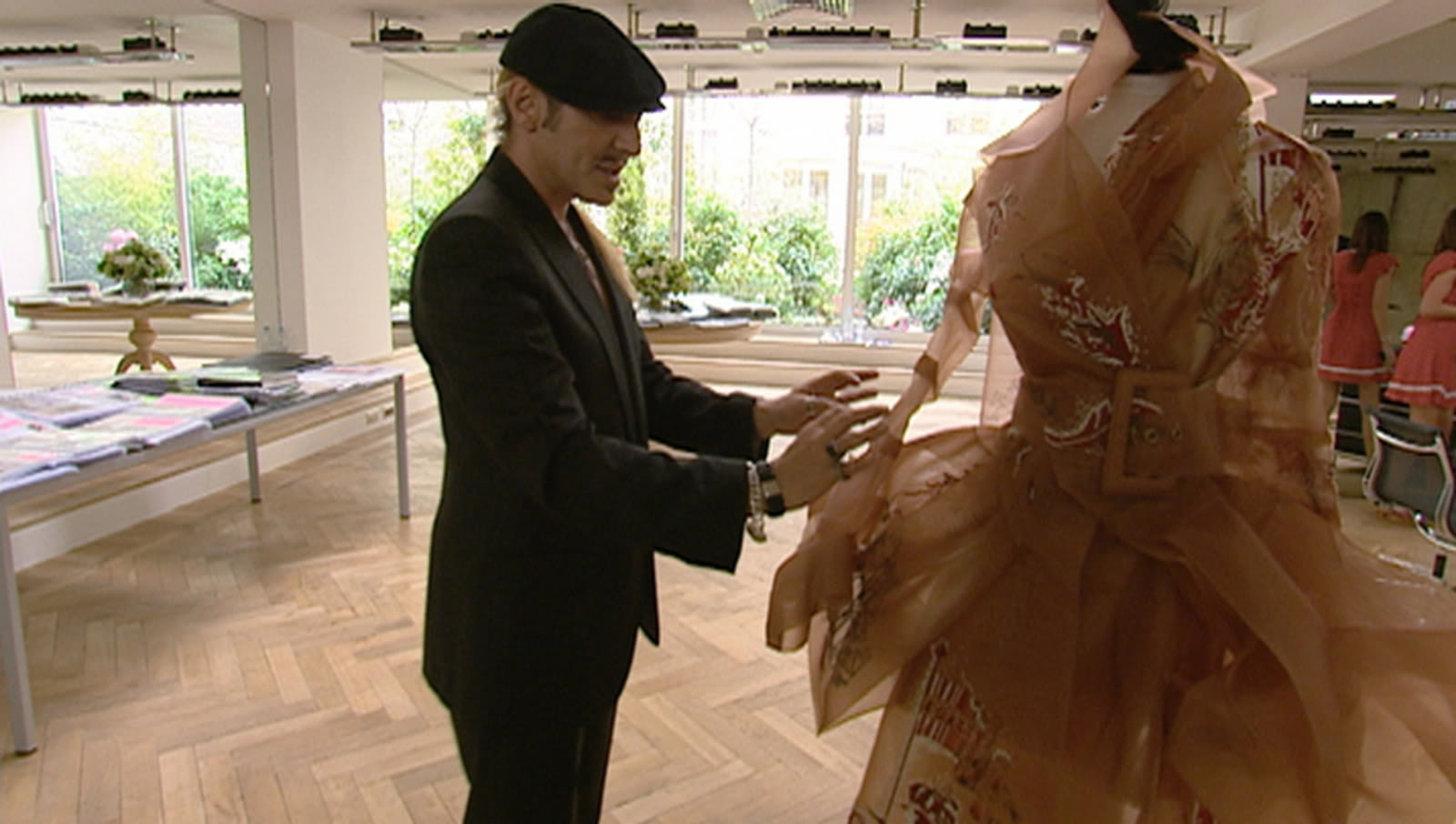 “We drew and designed the jewelries and sometimes Galliano came into the office to see the development and what interested him. Then he brought the pieces he liked with him and used them in the Haute Couture collections for Dior…

“The rest of the pieces were delivered to the fine jewelry stores. “

“Some of the pieces were also used for Dior Perfume commercials: For example a necklace we designed: It was worn by Charlize Theron in a “J´Adore” commercial. Later on that same necklace was developed further and became the one we recognize today… but to begin with it was part of our fine jewelry design project.”

“A lot of the pieces were designed and made by us in the Atelier. But Galliano always had the sense of what would work” Christophe explains.

“It was great to be a part of the beginning of a fine jewelry house like Dior. I had the chance to learn a lot and to make great friends there.” Christophe Says.

“The replacement was a part of Mr Bernard Arnaud´s strategic choice. He had a certain strategy like every other owner or director. Based on that he made a choice of replacing us and that I can understand and respect. It is normal, so I don´t judge. It was a choice.”

“Arnaud is a strategic man of communication and I think he could easier communicate about Castellane than about the three of us. So I understand his choice.” Christophe says.

ANOTHER COMPANY – A NEW START 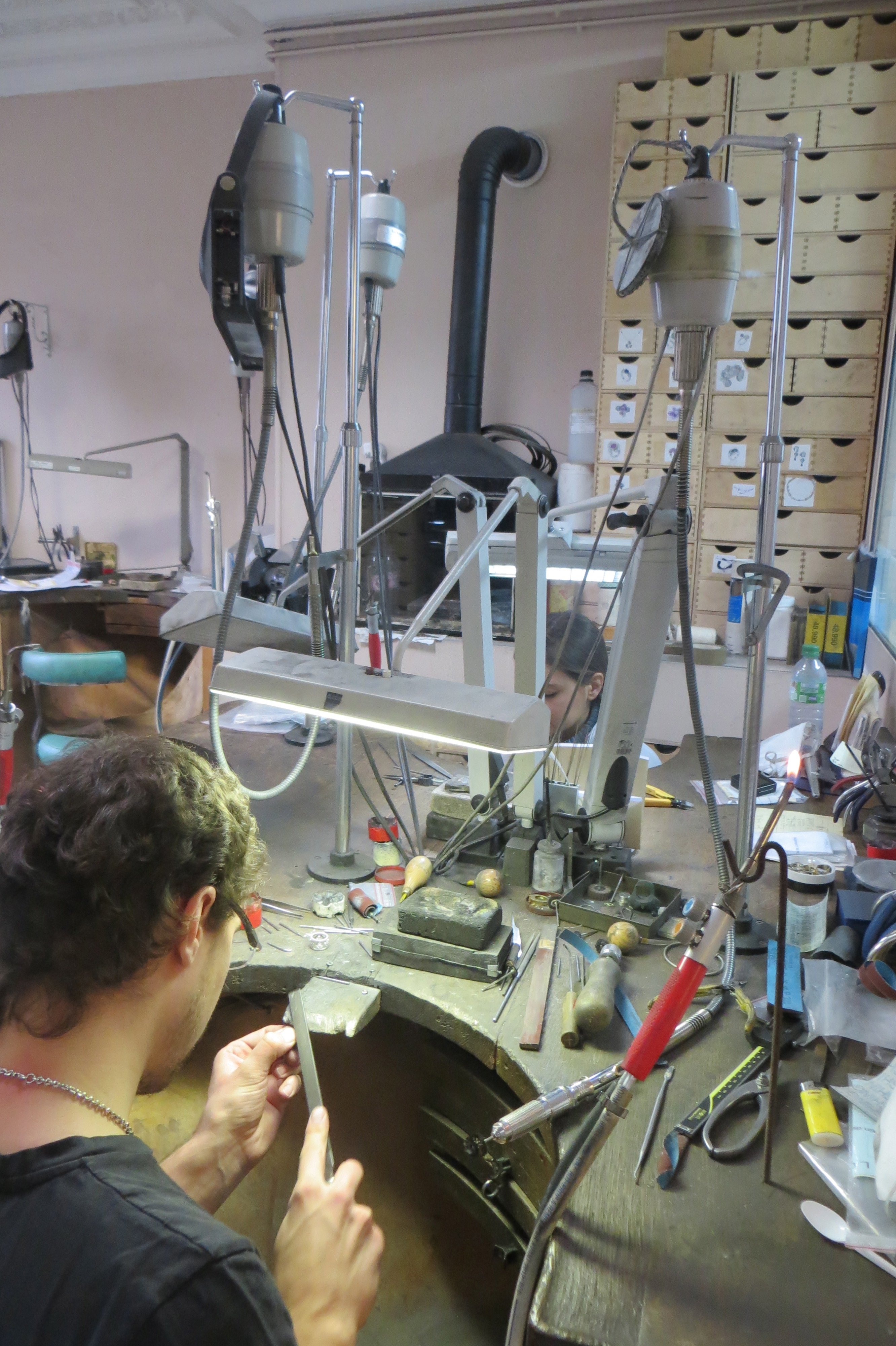 Christophe took a sip of his water, smiled and continued his story:

“So after a while I started working for another company where I was in charge of a lot of things. But I rarely shared the same opinion of the owner so I ended up quitting.”

“Before I left I asked Aurélien Bir: a 23 years old young man who worked for the company as well, if he wanted to follow me if I chose to start up a company for myself.

So I asked him if he wanted to be my associate, and once again he said yes so we ended up creating the 10V company.”

I looked at Christophe full of admiration over how much he has accomplished already – inspired by the stories from the world of luxury: The Place Vendome, the Ateliers and the fine jewelries.

Read the continuing article here: Part #2# where Christophe tells us more about what it´s like to work with fine jewelries in the world of luxury!