I met Gilbert Costes for the first time while I was dining at one of his many great restaurants: RUC, just opposite the Louvre. He happened to be there as well so I asked him if he would allow me to make an Interview with him some day. He kindly accepted. So I met him again 10.06.2013 at Marly Café. We sat down for a coffee and a talk about his business and luxury! Read the Interview here.

Article and Interview by Julie Johansen

Gilbert Costes and his son Thierry ownes some of the most appreciated restaurants, cafes and hotels in Paris under the group name Beaumarly,

Including: Café Marly, RUC, Matignon, Georges, Germain, le café Français, hôtel Thoumieux, Hôtel Amour, etc…… You´ve probably already been there but few people know the man behind the successful places. So my hope is that you with this article will get a little closer to what luxury in Paris means!

I arrived at Café Marly at noon, enjoying the great view to the Louvre… appreciating the fact that Gilbert had made time for me – to let me do an Interview. Many thanks to Gilbert for adding luxury to Paris!

Gilbert is a businessman, no doubt about that, and amongst those who has succeeded. He goes straight to the point and explains his opinions without any hesitation. Perhaps Law-school has taken its toll. But behind the business-façade, I felt a warm and caring man with a sincere interest in other people. 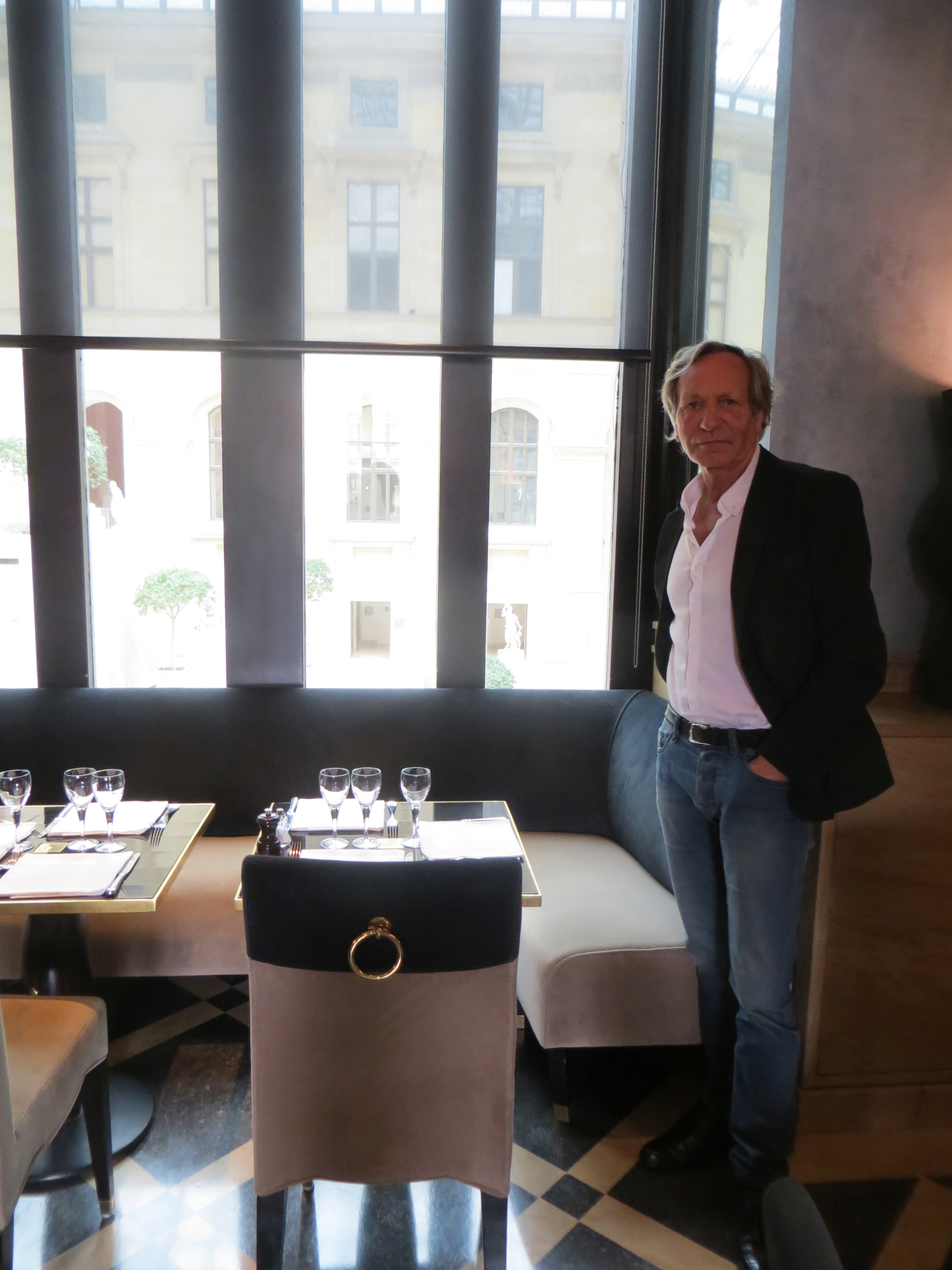 Gilbert Costes was born in the center of France and moved to Paris when he was 19 years old. In Paris he went to law school, and while studying someone hired him within the restoration business. With time he developed an interest within that area.

When Gilbert finished school he combined his law and restorational skills and started up his own company together with his brother and sister. Their companionship is what founded the Costes-Group!

“I was working with my brother for a long time, but today we work more separately, while keeping the family aspect in the things we do.”

Over time Gilbert Costes has constructed more than 40 luxurious places in Paris. You´ve probably visited most of them already if you´ve been to Paris and appreciated the chic and the luxurious. During fashion week the Costes restaurants are some of the must places to be.

What was the first place you constructed?

“The first café we did was Café Costes in the 14arr in 1984. Afterwards we have constructed several others, including the famous Hotel Costes (that you find at Rue Saint Honoré in paris), Café Marly (placed at the Louvre) and Georges (at the rooftop of Centre Georges Pompidou) etc.

Which one is your favorite place?

I like Café Marly. It´s a lovely place: with a beautiful environment, great people, and the nice holyday atmosphere…not to forget the nice view to the Louvre.

When visiting a Costes restaurant, hotel or bar you soon begin to notice that each of them is filled with a great ambience and a high-class aesthetic interior design, like the new born Café Francais, that you find at the Place de Bastille, facing the Bastille opera. It is designed by India Mahdavi and the studio M/M (Paris) 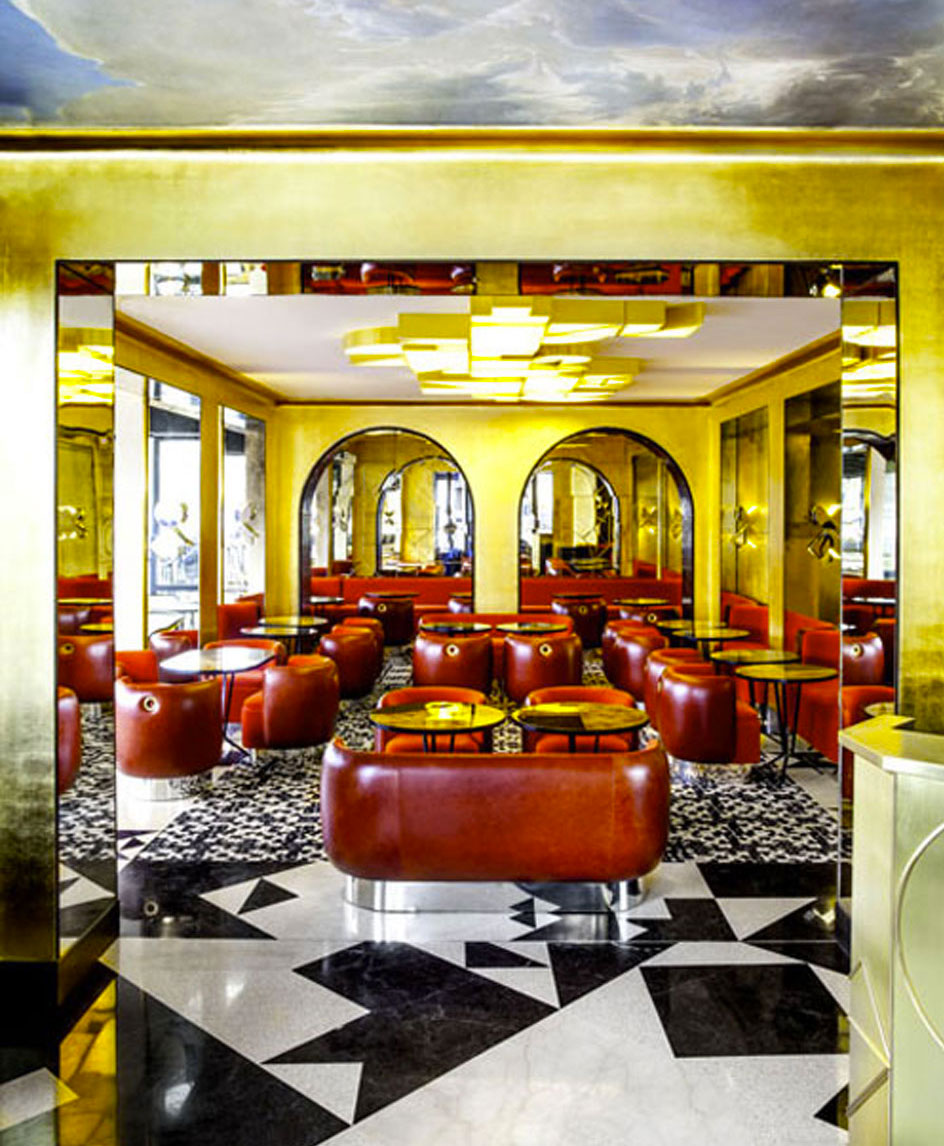 Is the aesthetic interior design something you´ve aimed for?

“It is true that in our work (In the places we choose and in the persons we work with) there is always a certain style, a search for perfection and esthetic …but it´s not something that happens systematically, it´s been developed in the search for perfection. We are always trying to be the best possible within our domain.”

And he certainly does. Gilbert Costes have worked with some of the most renowned architects and designers.

That may explain the magnificent interior design. Someone once said to me “Within the world of luxury you simply must work with the best of the best”. Below you see the Germain Restaurant. 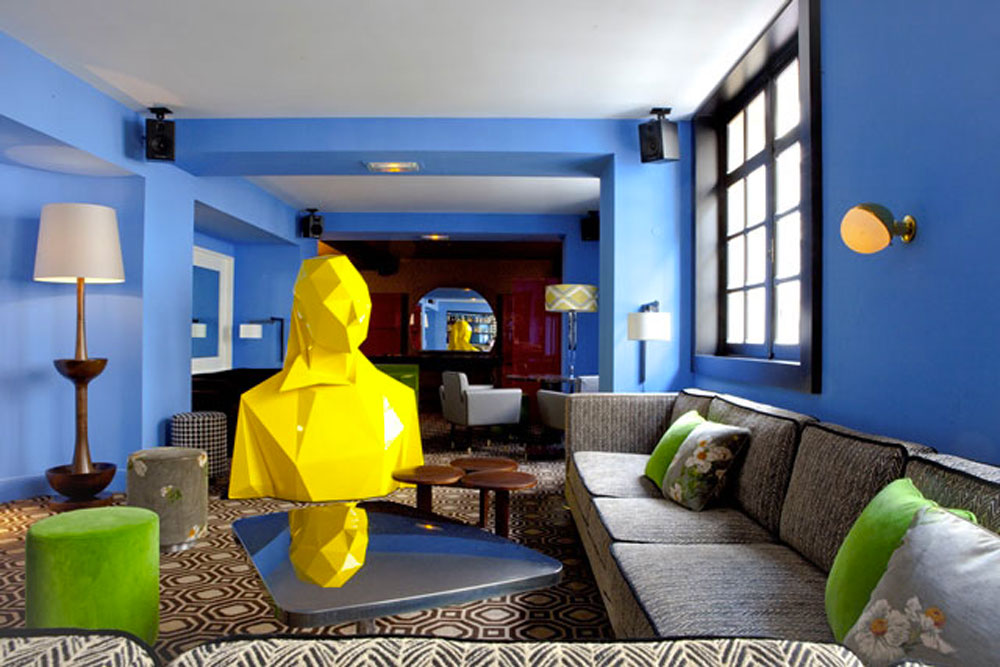 How did you start collaboration with Philippe Stark?

“It was actually my brother who started working with him, they were friends to begin with so at one point Philippe Stark proposed an idea for “le Fontaine des innocent” so he ended up working on that”.

How do you come up with the concepts for your places?

It all depends… each case is particular… it all depends of the location, our partners, our decorators, our reflections, our individual skills and our experience etc. who will decide what. It´s an evolution I think. 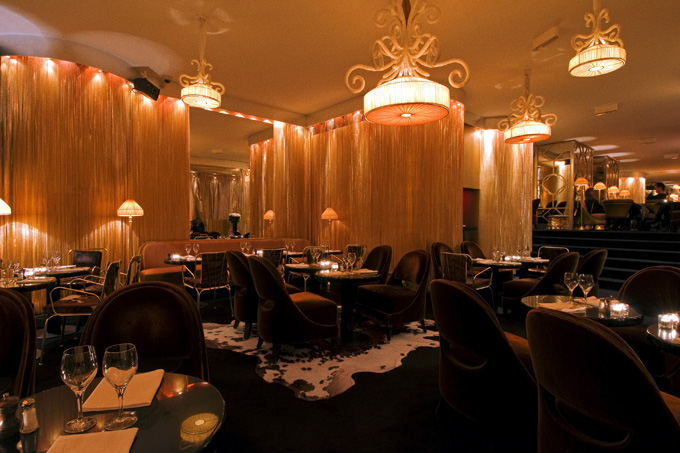 Most of the places owned by Gilbert Costes are upscale restaurants, cafés or hotels located in the best districts in Paris: along Metro Line 1…In the 7arr or 16arr. Recently also in the 4th and 6th arrondisment. It´s clear that the target-group is bourgeois! So Gilbert must know about luxury. Above you see the Matignon Restaurant / Club.

What does luxury symbolize to you?

Luxury is something that appears in the search for something: In the creation, in the beautiful fabrics, in everything that’s a bit out of the ordinary and unreachable.

What is a luxurious life to you?

A life in the jet set, with hobbies, vacation and lots of money.

What do you think of the luxury-business?

Luxury is an evolution. If you take fashion for example: within the development of the clothes there is an evolution. The people doesn´t dress the same way today as they did 40 years ago. There has always been an evolution within luxury but it´s not a revolution. When a revolution happens it is often a suddenly explosion of enthusiasm, a discovering in the evolution and that´s it…but it happens very rarely.

Luxury anyhow is something that stays inaccessible for many people… it´s something that belongs to the elite… That is my idea of luxury, but someone else might have another notion of what luxury is.

Luxury is something relative: It depends on how you position yourself. Each person has their own sensibility and notion of luxury, depending of: their environment, their evolution, their experience, their life-situation, dreams etc. People can have different ideas of what luxury is…. But still we cannot forget reality! That luxury for many is considered the inaccessible, something belonging to the elite. 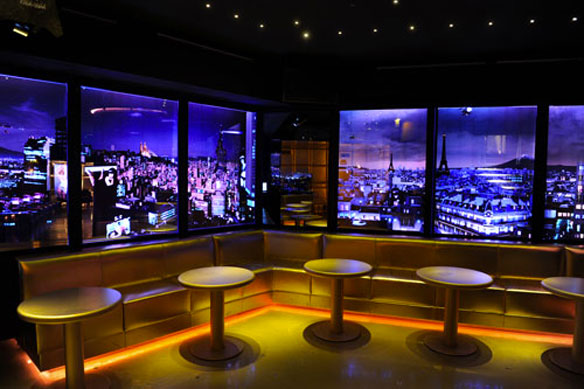 I wondered if he had always dreamt of starting up his own business within the restoration domain and how he has succeeded, so I asked him:

What was your dream when you were a child?

My dreams were often very attached to the present and the environment of the present. So they probably didn´t correspond to what I do today.

We live in a limited universe that dreams are fitted into. You cannot really plan your future, though someone tries to do so, it´s difficult to know what the future brings. It is something that happens gradually in our evolution.

So Gilbert didn´t had it all planed, but he surely got something right: A talent as a businessman, an ability of networking and collaboration with the right people, plus an understanding of the market-mechanisms and an ongoing will to construct and succeed.

How would you describe yourself?

THE KEY TO SUCCES 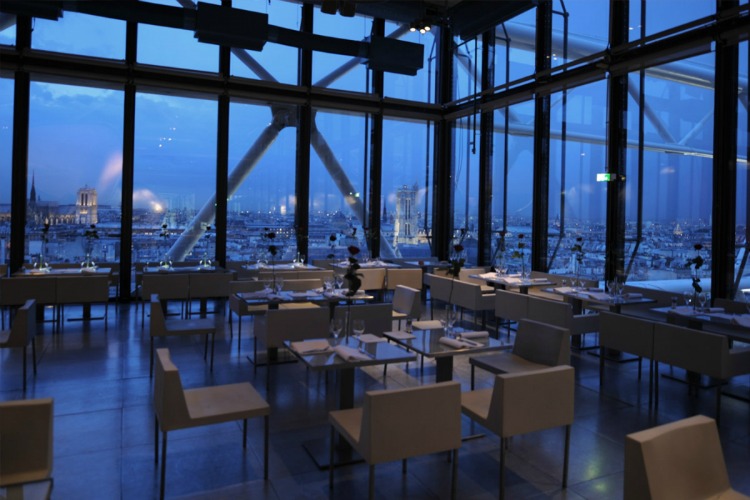 What do you think are the keywords to success?

1: First of all to be realistic, to understand and respond to the present era and peoples need in the given situation in the given time.

2: Then respond with perfection to their need. And aim for being the best within your domain.

The problem is that not everyone has ideas.  And even if you do there is still the next important step before obtaining success

4: The realization of the idea. That is the difficult part!  Once you´ve got the idea and have to put it into play, you still need for it to be accepted by the public/ by the consumer!

5: That is when you have to be fair: by being fair I mean having a certain realism of that is acceptable.

There is a certain realism that will have to be taken into account before you´re launching your ideas. Off cause you can be innovative and launch something new, but you still need to have a sensibility of what is possible within the frame of that given moment. Personally I think a keyword to success is realism.

But when that is said, there´s no harm done in always being a bit in advance and to have new ideas… but it´s important that it´s ideas that are realistic: and not to expensive for example.

And when that is said I guess it´s also important to know and collaborate with the right people: The influential ones. 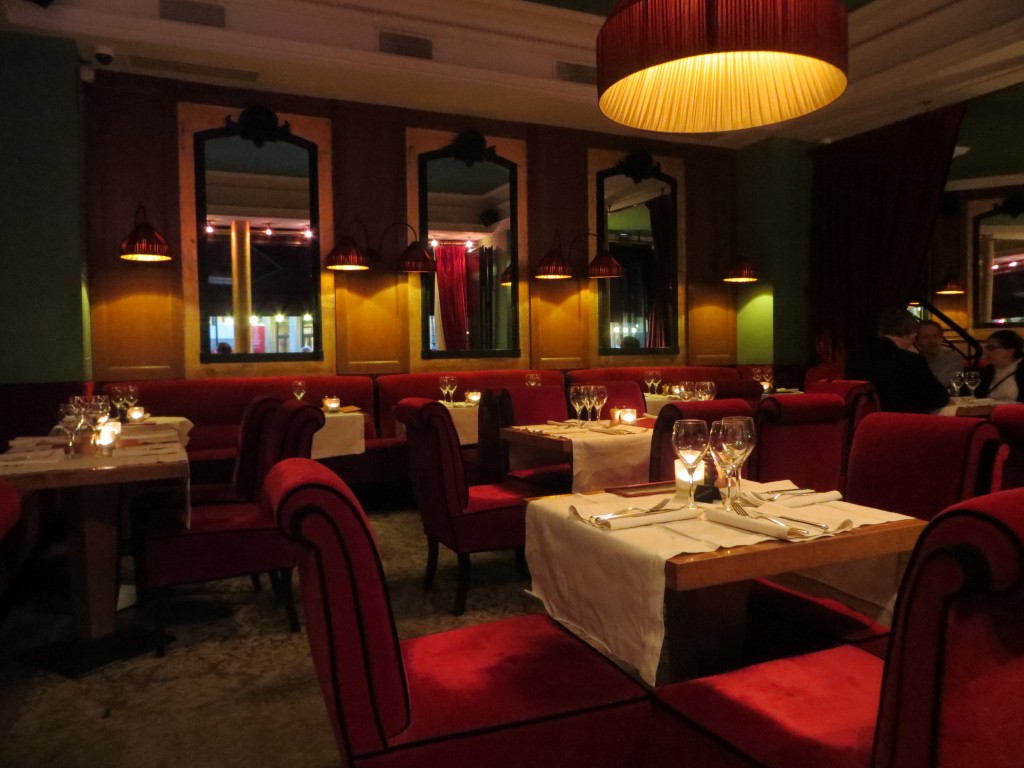 You´ll find all of the Costes restaurants located in Paris. (Above café RUC) What is it about Paris??

What is Paris to you?

Paris is like a “Carrefour” you can find all kinds of nationalities, personalities, and cultures here: with all it´s great museums, operas, theaters etc. 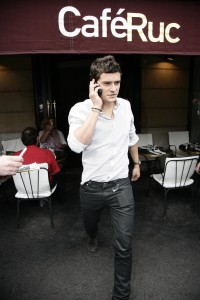 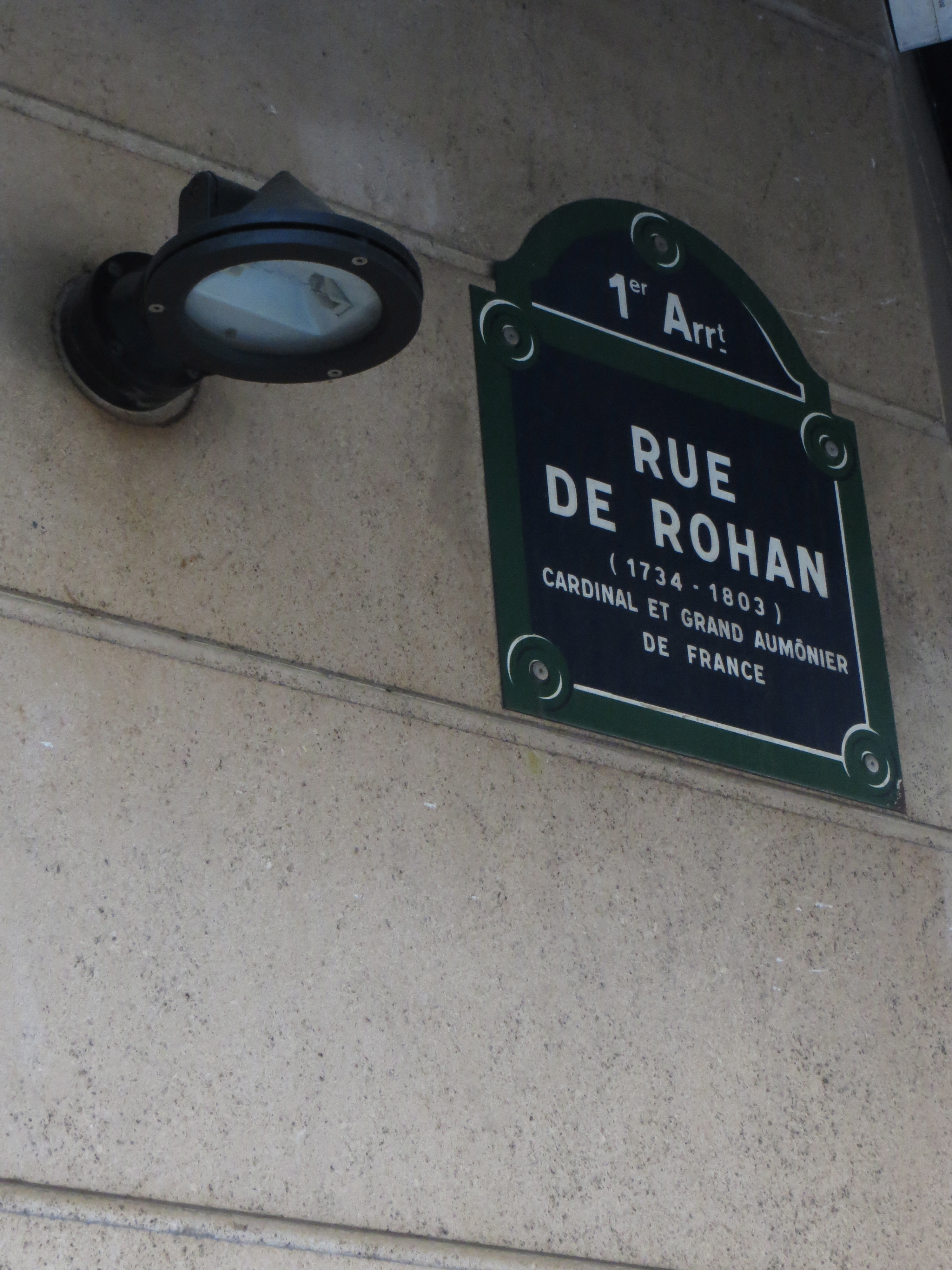 What do you appreciate the most about Paris?

The social life and the good connections… and the direct contact to the art that surrounds my restaurants: such as le museum Pompidou and the Louvre.

What inspires you here?

The people that I meet on my work, during vacations or when I go out. Otherwise I find inspiration from designers, our architects, art, music etc.
I´m personally more attached to house-music than classical music: It gives people a good energy, a feeling of being happy and I like that.

The goal is still to live the happiest possible.

Do you have any dreams for the future?

The dreams are always to do better, to discover, the search for perfection. You cannot enter an imaginary world where you don´t follow reality. 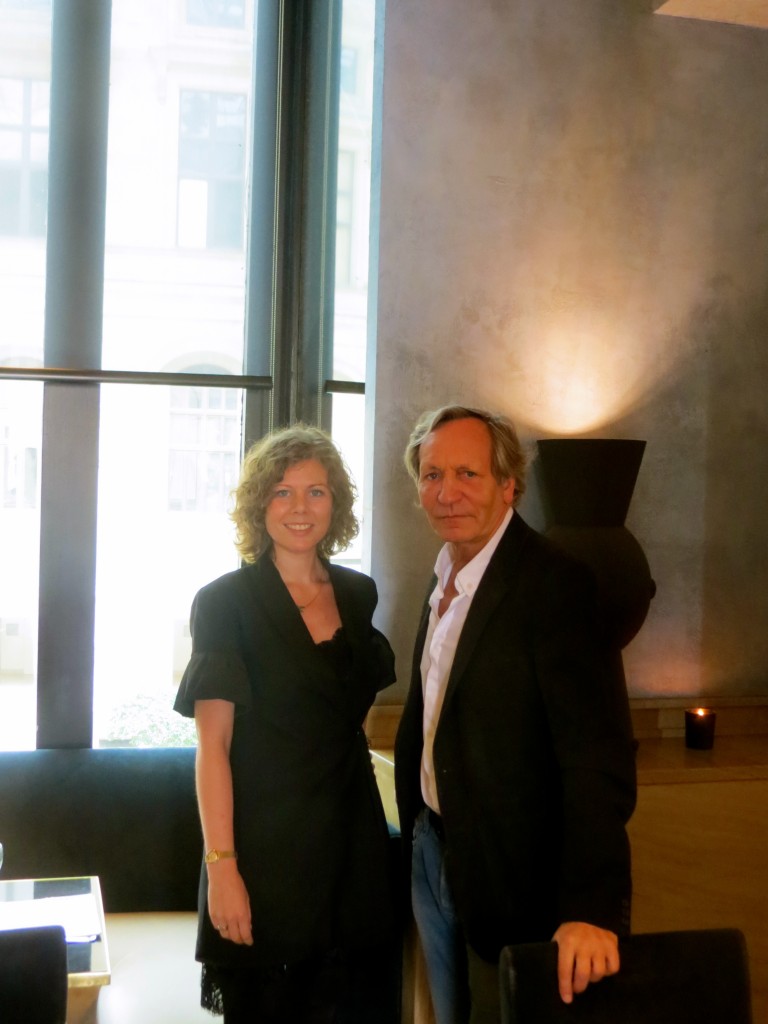 I thanked Gilbert again and as I left Café Marly and crossed the big square of the Louvre I re-thought in my mind, what Gilbert had said about Luxury: It is for the elite, the unreachable… it´s the constant aim for perfection…it´s in the innovative but still something recognizable… It´s constructed by working with the best within the domain…and somehow in the middle of all that you´ll find the dream!

The Costes – THE places to be: For the trendy, beautiful, 35+, well educated elite…

Le Tourville, A Costes restaurant in the 7eme

L´avenue, A costes restaurant in paris

Interview with Alexandra Mas, An artist
Leave a comment